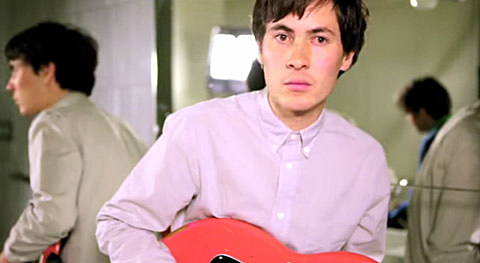 Austalian band Rat Columns were just on tour and main man David West is sticking around North America a little longer to tour one of his other projects, the mostly electronic Lace Curtain. (Not to be confused with ex-Harlem band Lace Curtains, even though it is actually very confusing. Leave off the last "S" for Australia.) Technically, Lace Curtain is West and Mikey Young (Eddy Current Suppression Ring, Total Control), but the latter isn't much for touring these days so this will be West in one-man-band mode. The tour, which is with Eaters, kicks off at Silent Barn on October 10 with Negative Supply and Hiro Kone on the bill as well. All dates are listed below.

Lace Curtain released their third EP back in February via Mexican Summer and it's probably the poppiest yet, while still keeping that chilly edge. Lead track "I Can't Wait" is hooky and danceable, and "Lovers Fade" is a pretty ballad that could've been on a Soft Cell album. You can stream those two and a few other Lace Curtain tracks below.

Eaters, meanwhile, will also be playing CMJ. All Lace Curtains/Eaters tour dates are listed, plus song streams, below...