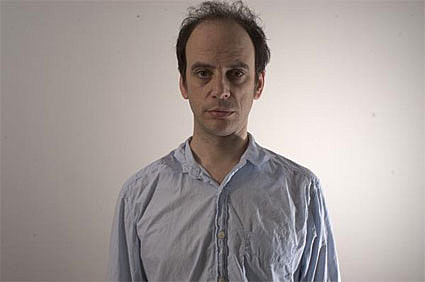 Antifolk founder Lach steps down from the Sidewalk Cafe after 15 years!

The final Antihoot will be held on June 30th!

Lach himself will be performing a full set at Sidewalk Cafe on June 28th at 10pm!

In a surprising move, Antifolk founder Lach will be leaving his long-standing position as manager/booker of the Sidewalk Cafe (94 Avenue A, NYC, 212-473-7373) and host of one of the city's longest-running shows, the Antihoot. Lach led the the open mic known as the Antihoot for 15 years, and it was at the Sidewalk Cafe that he nurtured such acts as the Moldy Peaches, Regina Spektor, and Nellie Mckay. Lach is moving on to pursue other musical options, particularly supporting his newest LP, The Calm Before, in the wake of Antifolk's astonishing recent success (Juno, Adam Green, Regina Spektor). The Calm Before is his finest release to date: it's heartfelt, intelligent, good-humored, and expertly constructed songwriting played with the irreverent attitude that has become the hallmark of the Antifolk aesthetic.

Lach will be performing a full set on June 28th at the Sidewalk Cafe at 10pm and hosting the final Antihoot on June 30th.

In 1983, a club booker at Folk City, located in Greenwich Village, turned down Lach, a young singer songwriter. His reason? Lach's style of folk was too punk. Lach then opened up his own club on the Lower East Side called the Fort; which hosted its first event the same week as the New York Folk Festival. His event was called the New York Antifolk Festival, which is still held annually at the aforementioned Sidewalk Cafe.

Lach is credited with coining the phrase 'Antifolk', which has served as a launching pad for musicians like Beck, Michelle Shocked, the Moldy Peaches, and Regina Spektor. His music is influenced by his conflicting love of Bob Dylan and Woody Guthrie, versus his love of The Jam, Sex Pistols, and The Clash. He has released five albums in twenty years, each one receiving rave reviews from everywhere from Billboard to Mojo to the NY Times.