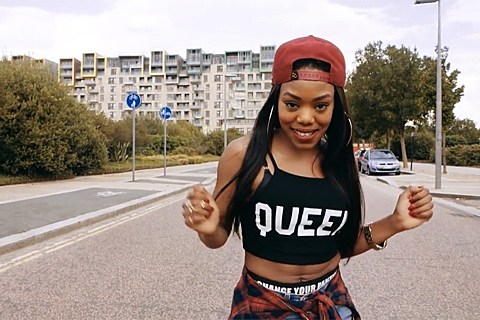 It seems like "Queen's Speech Ep. 4″ really made you more of a popular name around the internet. Why do you think that is?

I think "Queen's Speech 2″ really hit it off. But, for the Americans to find out about me, most of them found me through there ["Queen's Speech Ep. 4″]. There's a guy called DeLorean that posted my video on Facebook and he's got like 30 million views now. And I think he brought a lot of attention to that. So it's mainly him just posting that. Now, Erykah Badu shared some love, she said it's ill. And Natalie from Floetry. It's just crazy the people that are reaching out to me who's showing respect and love. It's overwhelming really. [The Boombox]

UK rapper Lady Leshurr has been around for a few years, contributing her vocals to Orbital's "Wonky," Basement Jaxx's Something About You," and more. As the interview quoted above points out, she's been getting a lot of hype for her own material thanks to the suddenly-viral "Queen's Speech Ep. 4." It's already gained her comparisons to Azealia Banks and Nicki Minaj (who she remixed more than once and sampled on "Queen's Speech 2"), and it's easy to see why it's taking off. Check out some of her stuff below.

Leshurr comes to the US to make her NYC debut on December 12 at Gramercy Theatre. It's her only upcoming US date, but she has couple other international shows. All dates are listed below.

UPDATE: The show was cancelled at the last minute, "due to unforeseen travel issues," and will now happen February 6 at Gramercy Theatre. Tickets are on sale.

Basement Jaxx - "Something About You" (ft. Lady Leshurr)