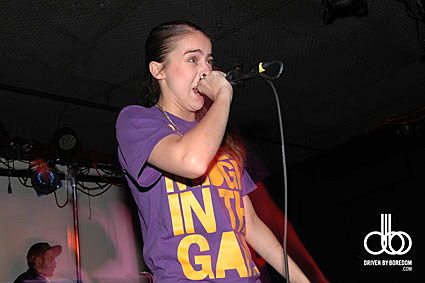 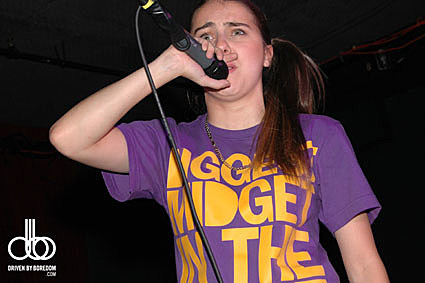 Professor Murder & Lady Sovereign played a show at Studio B in Brooklyn this weekend, and shortly afterwards the e-mails started pouring in - I mean the Lady Sov part of the show WAS advertised as a mini-set, but this is ridiculous....

Went to go see Lady Sovereign perform at Studio B in Greenpoint. I am not sure what happened, the show started off quite well. She performed two songs and then she got on the Mic and started complaining about how poor she was, and how she had no money and then BAM! she walked off stage, much to the dismay of Studio B.????? and the entire crowd who showed up to see her.

Yo that was pathetic. I can't believe you'd diss youself so hard in Williamsburg. Don't you know that you had a crowd of about 500 tastemakers there just for you? I thought you were someone who mattered. How wrong I was. Go fuck yourself.

Lady, your days are numbered. You just flipped the bird to Williamsburg, the center of the universe. You're over sweety. [Rock Star Diary]

...and by "ridiculous", I of course mean the part about Williamsburg being "the center of the universe". :-) Igor describes the situation like this:

Last night at Studio B in Brooklyn rapper Lady Sovereign completely broke down on stage. As she was waiting to go on stage she started setting this flier on the wall on fire. She got up on stage and the first thing she said was that this was the smallest crowd she had played to in "a long time". This probably had something to do with the fact that people waited two hours for her to go on. She then played Love Me or Hate Me but she didn't sing the choruses. Then she proceeded to say she was just here for the money. She said she was broke and didn't want to go on. She was like "I don't know what I am doing, what song is next?" Then she did another song and just sort of broke down. She said that she had been playing the same songs for two years and that she was sick of it. She told the audience that we couldn't possibly understand. She then was like "fuck this, I don't care if I don't get paid" and walked off the stage after a quick talk with her DJ. It was totally surreal.

Igor also supplsed the pictures on the top of this post, and the following video:

Is she for real, or is it all one big continuing psycho act. Did anyone see her show earlier in the night with Gwen Stefani?

Professor Murder also played the Studio B show. I hope their set was longer. Check out the top of this post for a brand new Professor Morder mixtape that they described to me like this:

we went to the Brothers Studio in Greenpoint and recorded lots and lots of live instrumental jams which we cut up into dozens of loops, which we sent to Caps & Jones, who used them along with other tracks and vocals and everything else to make this mix. The mix also have a preview of our single "Dutch Hex", which will be coming out sometime soon on the new Brothers Label, run out of the Brothers Studio.