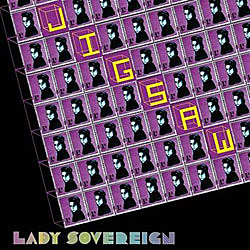 Louise Harman is just 23, but already she's had quite a life. By the age of 20, she had scored a Top 10 hit with the Ordinary Boys - Nine2Five - and recorded with the Streets. In 2005, she got a deal with Island Records in the UK, while Jay-Z himself signed her to his Def Jam label in the US...

...Then things started to fall apart. "I went on strike and stopped doing stuff, so Def Jam got the hump with me," Harman shrugs, sipping on a vodka and Red Bull in a pub in Wembley, north London, near where she grew up. Her initial meeting with Jay-Z took place in front of R&B star Usher and producer LA Reid, and was, she remembers, an uncomfortable experience. "All these executives, on the top floor of a high-rise building, all eyes on me. It was like an audition. Jay-Z is a cool guy, but we only hung out properly once - it's not like we were best friends." Her mother was (and still is) seriously ill with a brain tumour. Meanwhile, Def Jam had spent vast amounts marketing her debut album, Public Warning, and saw little chance of profiting from its 300,000 sales. The pressure was on.

The tipping point was a disastrous performance at New York's Studio B in May 2007. Harman told the audience she was broke and bored of performing the same songs; she left the stage after two tracks to a chorus of boos. "I lost the plot a few times. I was cutting myself and stupid things like that. I was tired," she says now. "I felt like it was just push, push, push. I didn't have a chance to record any new stuff, it was the same old songs."

She flew back home. "My manager rang me and said, 'OK, it's definitely over.' And it hit me." She insists that Def Jam didn't drop her; the parting was a mutual decision. "It just had to be done, for their sake, for my sake. It wasn't messy, it was just ... gone."... [Guardian]

Lady Sovereign doesn't kick off her proper North American tour - the one that includes shows at Highline Ballroom and Music Hall of Williamsburg - until May 1st, but she is in NYC now to promote her record, Jigsaw, that came out last week. That promotion included two NJ Hot Topic in-stores (as if you needed another reason not to like her). That promotion also includes a free (with RSVP) show at Tribeca Grand tonight (4/11). Ladytron and (members of) The Faint, who play their second of two shows at Webster Hall tonight, are both DJing. All dates below...