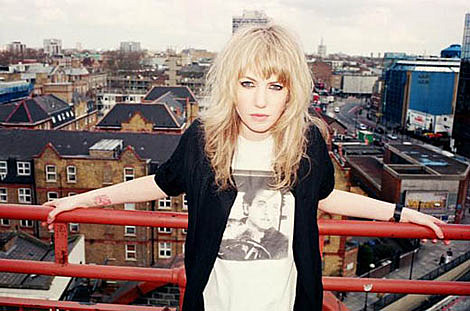 "Me and my buddy started a band called Two Lane Blacktop. It was like Iggy and The Stooges meets The Clash. I played lead guitar and was the only girl. We did lots of touring and stuff, got ourselves quite a following in New Zealand. I spent a lot of time in the back of a clapped out old van called cherry with 4 smelly boys. Getting carsick. Sleeping on couches and floors. Driving through the night. We played in Australia lots. That also required hours and hours of driving in a shit van - only swap the cool New Zealand bush-land with 40 degree dusty Australian desert. We even drove past a massive bush fire once.Those days were fun.

We managed to make it over to the states for some shows. I can actually say I have played CBGB's. I stood and played on the same stage Deborah Harry, Joey Ramone, and many other idols of mine have played. Rad. Aside from New York we also played in Los Angeles. That was heaps of fun. On our return to NZ, we started having personal differences in the band. A big tour was booked for Australia with a band called the Modey Lemon. We were then due to fly on to South By Southwest which we were supposed to be playing at. Literally two days before our flight to Australia, our singer decided to quit the band. Our drummer followed suit. I was left, devastated, bitter and angry. So in a fit of impulsive spontaneity I thought 'fuck it, I'm getting on that damn plane with or without my band' and I did. No money, only my suitcase, a guitar, and three empty seats beside me." [from Ladyawke's bio]

Wiki say, "Phillipa "Pip" Brown (born c. 1981), better known by her stage name Ladyhawke, is a New Zealand solo singer-songwriter, playing all the instruments in studio and touring with a band... Ladyhawke named herself after the Rutger Hauer film Ladyhawke. Ladyhawke is best known for the 2008 single "Paris Is Burning", which she wrote after a visit to Paris. Her debut album was released on Modular Recordings in September 2008."

Not to be confused with the Canadian band Ladyhawk, Ladyhawke was supposed to visit us not long after that Modular album was released. Cancelled dates in New York City, Chicago, Los Angeles and San Francisco were blamed on "paperwork issues and Uncle Sam".

This March, SXSW time, Ladyhawke will try again. NYC shows are scheduled at Bowery Ballroom on March 24th (tickets on sale at noon), and at Studio B two days later (tickets on sale).

The SXSW show is March 18th at Stubb's. CA & Chicago shows TBA? All dates, and the "Paris is Burning" video, below...