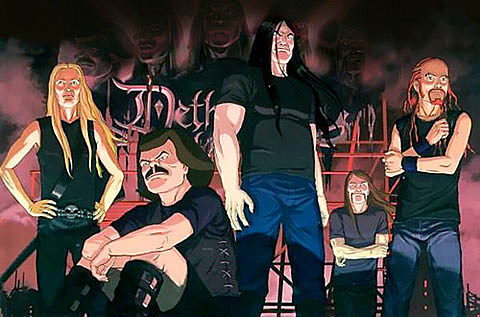 There were rumors this was going to happen, and then it was denied, but now it is official:

Due to the continued incarceration of LAMB OF GOD singer Randy Blythe in the Czech Republic, the band's co-headline tour with Dethklok scheduled to begin August 1st in Seattle is being cancelled. The band regrets the decision but the uncertainty of Randy's release makes it impossible to carry on with the tour. Upon Randy's release, it is the band's intention to rebook a tour in the fall and at this time the band fully intends to participate in the Mayhem Cruise in December.

LAMB OF GOD wishes to thank Dethklok, Adult Swim and Gojira for their support and patience as well as all of the promoters who had dates on the tour. Last but certainly not least, the band thanks all of the fans who bought tickets for the tour and who have been supportive of Randy and the band over the last month that Randy has been held in Prague. Without the fans, there is no LAMB OF GOD.

In light of circumstances beyond our control, the upcoming Dethklok and Lamb of God with Gojira summer tour has been canceled. Refunds will be available to customers who already purchased tickets through their point of purchase. We thank Dethklok fans for their continued support and look forward to releasing information about the band's upcoming third album and a planned fall tour in the coming weeks.

Gojira was scheduled to open the NYC show at Roseland Ballroom on August 29.