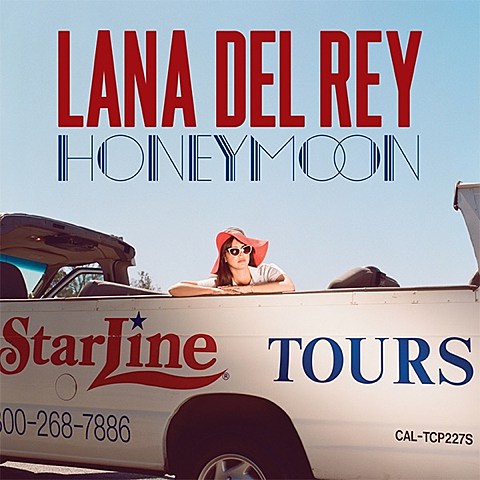 For a minute there, it seemed like Lana Del Rey was going to have the quickest rise and fall the music world had seen in years. A lot of people (us included) got caught up in the initial excitement of breakout single "Video Games," but Lana quickly became a controversial figure, famously tanked on SNL, and rushed out her album Born To Die with scattered production and more filler than hits. Just a few months after "Video Games" dropped, a lot of people (us included) were ready to be done with Lana Del Rey. Lana herself even seemed potentially done. A week after Born To Die came out she said she might never make another album.

But then two and a half years later she put out Ultraviolence, a record with bluesy overtones courtesy of Black Keys frontman Dan Auerbach that was surprisingly very good. It was enough to get us excited about her again, and thankfully she took less time to get a followup this time -- her new album Honeymoon comes out today. It's the kind of album I hoped she was going to make when I first heard "Video Games" and quite possibly the best thing she's done yet.

It's easily the most cohesive album of her career so far, with slow, atmospheric, lightly psychedelic songs making up the whole thing. Lana has always been interested in the past and these gloomy Sunday songs have more than a little Billie Holiday influence, an artist she shouts out in the chorus of "The Blackest Day." She also has an obvious ode to traditional Italian ballads, "Salvatore," and those vibes sneak into a few other songs too. Billie isn't the only vocal jazz legend Lana pays tribute to here. The record ends with a cover of "Don't Let Me Be Misunderstood," which does take cues from The Animals' version but otherwise more closely echoes Nina Simone's. She also quotes Bowie's "Space Oddity" on "Terrence Loves You." It's not all throwbacks to the past though; Lana's hip hop influence faintly remains in the slowed-down trap beats of songs like "Freak" and recent single "High by the Beach." The pop landscape is much different now than when "Video Games" first broke, but even with stars as massive as Taylor Swift and Miley Cyrus going on to channel LDR's sound, the dreary Honeymoon is still nothin' for the radio. (But they'll still play it though, cause it's that new Lana Del Rey.)

The album is out now and you can listen via Spotify below. No upcoming tour dates at the moment.