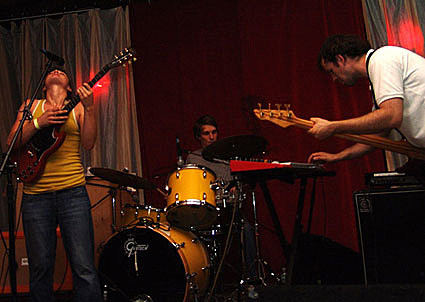 LAND OF TALK NO LONGER AN UNSIGNED BAND
"Land Of Talk will release their acclaimed debut mini album Applause Cheer Boo Hiss in the U.S. on March 20th via The Rebel Group."

"The Rebel Group is pleased to announce the release of Land of Talk’s Applause Cheer Boo Hiss. Rebel Rebel Management’s Thaddeus Rudd founded The Rebel Group in 2006. They are distributed by Alternative Distribution Alliance (ADA) and are based in Brooklyn, New York. To date, The Rebel Group has released albums by The Ark, Say Hi To Your Mom, and Lady & Bird. Rebel Rebel Management was founded in 2001 and manages Lucero (Liberty & Lament), the Caesars (EMI/Astralwerks) and the Teddybears (Big Beat/Atlantic)."

Regular readers of this site know that I'm already a huge fan of the album since it came out in 2006 in Canada - so I'm definitely excited about this, but even more so hope they announce an even newer album some time soon.

Starting at SXSW on March 14th - Land of Talk are going on tour with Menomena and the UK's Field Music. They play Bowery Ballroom in NYC on March 28th. Tickets are on sale. All tour dates below...

Menomena also play the Crystal Ballroom in their hometown of Portland on January 28th.

Here's the Land of Talk tracklisting: