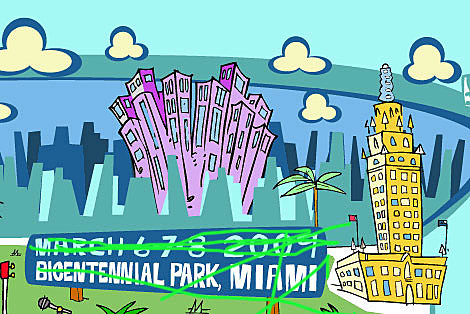 The 2009 Langerado Music Festival has been cancelled due to sluggish ticket sales.

Langerado's independent local promoters, faced with a very tough decision in a dismal economy, cancelled the 2009 event only after every possible option was exhausted.

As Langerado Co-Promoter Ethan Schwartz explains, "Langerado has always put the fan experience first. Unfortunately, during these difficult economic times, and facing a first year in a new venue, it's become apparent that we cannot execute a production that lives up to the high standards of our past events. Putting Langerado on hold was the toughest decision we have ever had to make. We are very grateful for the support of the greater-Miami community and the music community during this difficult time."

All tickets purchased will be refunded. Please look for ticket refunds to be processed in the next 5-7 business days. Each order will be refunded to the credit card in full, minus the included order processing fees. Shipping fees will also be credited for those orders that did not select the free shipping promotion. For information on ticket refunds please contact Music Today

And, Bonnaroo and Coachella just announced their initial lineups.