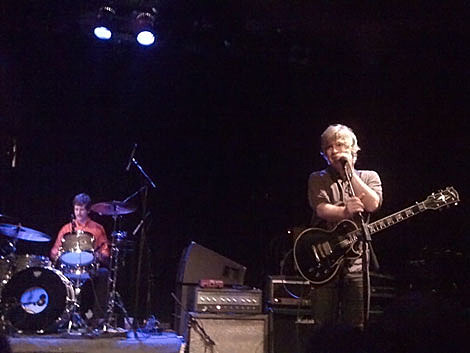 There weren't a ton of shows going on in NYC last night (10/28), relatively speaking, but members/collaborators of most indie rock bands in existence were part of them. Ben Gibbard (Death Cab for Cutie, The Postal Service, husband of She of She & Him) played with Jay Farrar (Son Volt, Uncle Tupelo) at Webster Hall with John Roderick (The Long Winters) opening.

"Along with all 12 songs from the album, Farrar and Gibbard each sang a song from a different project, before finishing with a pair of covers. Gibbard sang a rootsy version of "Couches in Alleys," a tune he sang on a 2004 album by the Belgian electronic band Styrofoam. Farrar opted for a rousing take on "Voodoo Candle," from his 2001 solo debut, "Sebastopol." And the covers: Farrar handled lead vocals on a countrified rendition of Bob Dylan's "Absolutely Sweet Marie," and the pair closed the show with Gibbard singing lead on a shattering version of Tom Waits' "Old Shoes (and Picture Postcards)."" [listen, damnit]

Meanwhile in Brooklyn, Nada Surf (who played electric instead of acoustic as originally advertised) (and who played as Holly Miranda's backing band at Bowery Ballroom one night earlier) teamed up with Charles Bissell of the Wrens and They Might Be Giants for an indie rock benefit at Music Hall of Williamsburg. Videos below.

Over at BAM it was "The Long Count" featuring the we've-collaborated-with-everyone Dessner twins from the National in partnership with the Breeders-Deal twins who count a member of the Pixies among them. Joining them on stage was Shara Worden (My Brightest Diamond, Sufjan Stevens, The Decemberists) and many other indie-friendly musicians, classical and otherwise. Everyone who wasn't playing at one of these shows, was probably in the audience of this one. Check out pics and our review HERE, and our interview with Bryce Dessner HERE, and then check the show out, if you haven't already, on Friday (Mischief Night) or Saturday (Halloween).