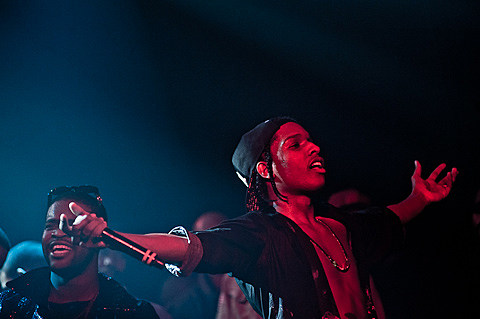 A$AP Mob ended their set at the annual Vice Kills Texas party late Saturday night by coming off the stage to confront a crowd-member who'd been throwing PBR tall boys at the group. Earlier in the show, with BV's Andrew Frisicano in attendance, they called out the audience for tossing objectsat them, at one point spitting on the crowd in the direction of the suspected thrower.

At times, A$AP Rocky seemed to be trying to diffuse the situation...until the group rushed off the stage to end the show (when they did, Rocky was in the midst of saying, "if one more person..."). Most of the crowd scattered away from the fray. The cops cleared the venue after that and at least one audience member left with a bag of ice on his head and blood all over his face and t-shirt.

Trash Talk played the show earlier in the night. Fidlar never got to play their 3am set.

The group has something of a history of ending shows with violence. They did something similar at last year's CMJ.