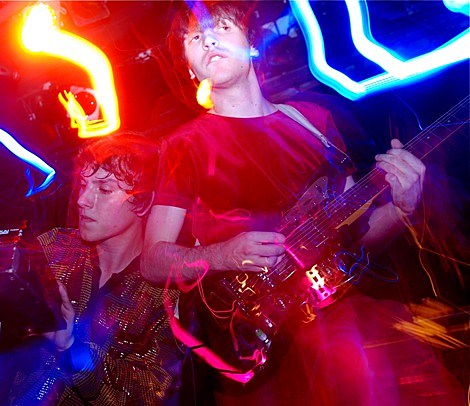 Like Ladyhawke, Late of the Pier are visiting our country in March to play shows at SXSW in Austin, and at Studio B and Bowery Ballroom in NYC . $10 tickets are on sale now for the April 3rd show at Studio B, and $15 tickets go on sale at noon for the April 1st one at Bowery Ballroom. Both NYC shows (and maybe most of the tour) is with the Whip who LOTP also played with last time they were here. In between Bowery and Studio B, LOTP play an April 2nd show at Yale.

Late of the Pier's debut album Black Fantasy Channel was released in the US on January 13th with two US-only bonus tracks.

Unlike Ladyhawke, Late of the Pier made it here in 2008, and they are playing way more than just a few shows while they're in North America in March (and April). That includes the Winter Music Conference in Miami and Coachella in California. All dates below...