Late of the Pier 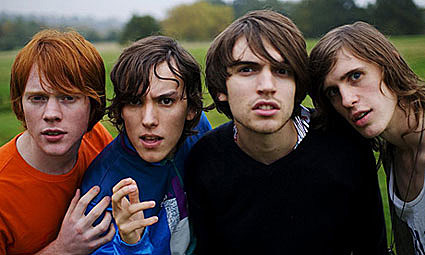 On October 24th during New York City's CMJ Music Festival, UK DJ extraordinaire, forward thinker and BBC's very own Pete Tong will be teaming up with Live Nation and launching the premier of a new music platform; the Insiders Music Series. "INSIDERS brings together an exciting combination of the hottest electronic artists and dj's for one extended night in the legendary Irving Plaza venue. A cutting edge 'micro' festival in the city." Explains Tong who aims to showcase some of the worlds biggest and burgeoning electronic acts from all over the world, all under one roof and for one night only this October at New York's historical Irving Plaza.

"Boasting a back catalogue of songs that swing from glitchy electronica to 60s pastiche via comedy game-show music, Late of the Pier's set isn't exactly conducive to a calm atmosphere. And it's one of the best festival sets we've seen for a long while, in terms of enthusiasm from the fans and the sheer inventiveness of tracks like Bathroom Gurgle and Heartbeat. So much so we don't even care that we now have 17 pints of lager absorbed in our T-shirt." [Guardian]

Tickets for the Irving Plaza show are now on sale. Unfortunately it is the same night as Roisin Murphy's U.S. debut.

More Soulwax tour dates HERE. The NYC "Insiders" flyer, and info on Late of the Pier's album and other dates, below... 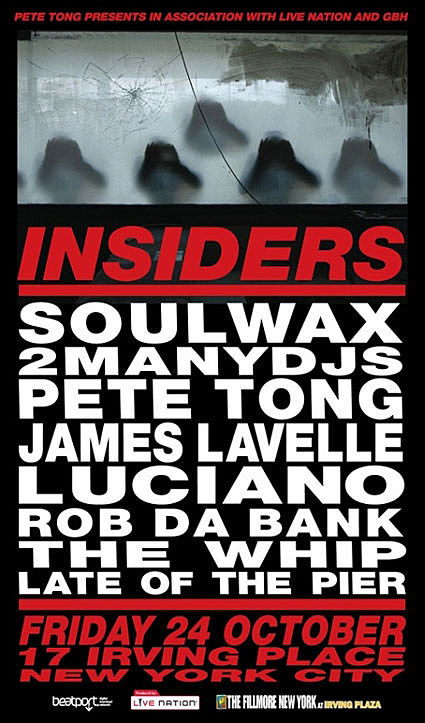 Produced by Erol Alkan, Fantasy Black Channelis an album full of undeniable highlights and features previous UK singles 'Space And The Woods', 'Focker', 'The Bears Are Coming' and 'Bathroom Gurgle'as well as the future-classic 'Heartbeat'.

Recorded at Late Of The Pier's Nottingham home studio and London's Miloko Studios, Fantasy Black Channelis a massively daring album in terms of scope and ambition. It segues between musical styles with fleet footed fluidity, constantly experimental and boundary-pushing yet focused and - at its core -unashamedly pop.

Late of the Pier will play their first- ever US gigs in October including a play at CMJ on October 24.

Late of the Pier - Bathroom Gurgle