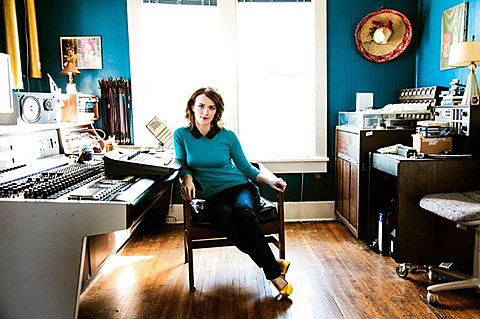 Laura Cantrell has teamed with The Charlatans for a new 7" being released in UK for Record Store Day 2015. It's a hybrid cover / answer song to The Charlatans' "Emile" which is on thier new album, Modern Nature. Cantrell's version, retitled "Emanuel," uses the string arrangements by High Llamas' Sean O'Hagan from the original but wrote new lyrics, and it features pedal steel guitar by Son Volt's Mark Spencer. "Emile" was intended to be a "farewell" song in the spirit of Dione Warwick's "Walk on By" and, as told to Q magazine, Charlatans frontman Tim Burgess thought it would be interesting to get the other side of the story:

I met Laura Cantrell a few years ago through a mutual love of new order. We sang Love Vigilantes together at her gig at The Union Chapel in London. I'd always loved the storytelling element in her songs and I wondered what she'd make of Emilie. I sent her the song and we were knocked out with what came back, it was the second half to the story.

And here's what Laura says in return:

I thought Emilie should seem a bit ethereal, but the more I meditated on her, the more interesting it seemed to me that she have some resilience, some inner toughness of her own, even with an overlay of romance and melodrama. The idea came about that perhaps she'd been denied the ability to speak for herself and that perhaps the romance/relationship she was experiencing had emboldened her, helped bring out her own voice. Certain images, like characters from Jane Eyre whose mysteries are revealed dramatically, or old films like Light In The Piazza with its young American woman thought to be simple minded as she marries into an Italian family, were steeping themselves into the mix.

You can listen to Cantrell's "Emanuel" and The Charlatans' original below. The flip side to that RSD15 7" is a cover of "Emile" by Sinkane.

In other news, Laura Cantrell will be doing a residency at Brooklyn's Union Hall every Tuesday in May. Guests include Mamie Minch (5/5), Franklin Bruno (5/12), "films by Russell Scholl" (5/19) and a TBA guest for the final show (5/26). Tickets for all four Union Hall residency shows are on sale now.