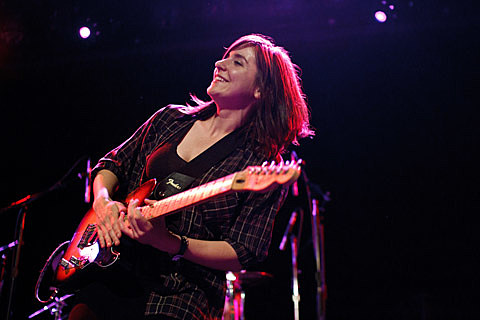 Laura Stevenson and the Cans have a short run of dates this month which kicks off in NYC for CMJ and then makes its way south, culminating in Gainesville's The Fest. During CMJ the band will play the Deli showcase at The Delancey on October 16 with Blonds, Shakey Graves, XNY, Backwords, Swear and Shake, and more. Then after that, they'll play the Let's Get Messy showcase at The Rock Shop on October 17 with Roomrunner, Archie Powel & The Exports, Twin Tigers, Pretty & Nice, and more. Advance tickets for the Rock Shop show are available and you can also try to get into both of those shows with your CMJ badge.

As mentioned, when the band returns home after their October run, they'll play a local show in Brooklyn at Public Assembly on November 11 with The Shondes, Leda, and ADVAITA. Tickets for that show are still available.

In related news, The Mountain Goats' 2002 LP, Tallahasse, celebrates its tenth anniversary this year, and in honor of that, Crooked Neighbor is releasing a tribute album called Tallahasee Turns Ten, out digitally on November 5 and physically in January, 2013. The album features covers by Laura Stevenson, Kimya Dawson, Jeffrey Lewis, Miracles of Modern Science, Andrew Jackson Jihad, Bomb the Music Industry! and others. You can stream Laura Stevenson's take on "No Children," and check out a list of all upcoming LSATC dates below.