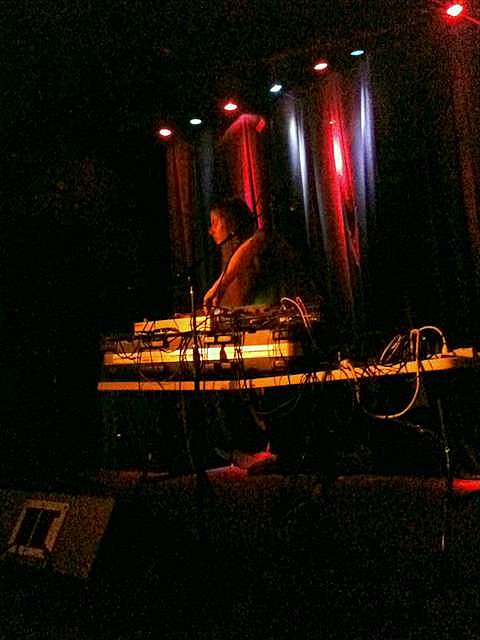 In the past, Laurel Halo has made production based dance music -- like on her Hour Logic EP and the Spring EP released under her King Felix moniker -- but on her new album, Quarantine, she crafts atmospheric art pop led most heavily by her own vocals. At her show at Public Assembly on Saturday (7/21), the mix of these two sounds came across really well. She began her set turning knobs at her boards, creating layers of ambience and head knocking bass drums, and almost never took a breather. But in between her passages of psychedelic dance, she would pick up her microphone to deliver songs from Quarantine like "Thaw," "Years," "MK Ultra," and "Carcass." If you went in expecting to hear Laurel with a piano playing the bulk of Quarantine, you may have left a little disappointed, but blending the sounds of her diverse bodies of work is what makes Laurel Halo the distinct musician she is.

The show began with a set from Burning Star Core (aka C. Spencer Yeh) who rotated between the weird and the weirder, building rhythmic (but rarely melodic) sound collages of what could pass for film sound effects and tying in his frantic, off-kilter violin playing. He was followed by Noveller (aka Sarah Lipstate), who with no more than a guitar and a series of effect pedals, creates compelling melodic passages. As Sarah would close her eyes and rear her head back, she sent both herself and the crowd into a drifting state of intoxication. Then, right before Laurel Halo took the stage to close out the night, we got a set from Pete Swanson (ex-Yellow Swans) who played on the floor almost completely in the dark. He had an analog reel-to-reel tape spinning as he flicked switches and plugs, gradually turning what began as a rather straightforward four-four loop into a thick wall of noise.