Laurel Halo at MoMA PS1 in 2011 (more by Amanda Hatfield) 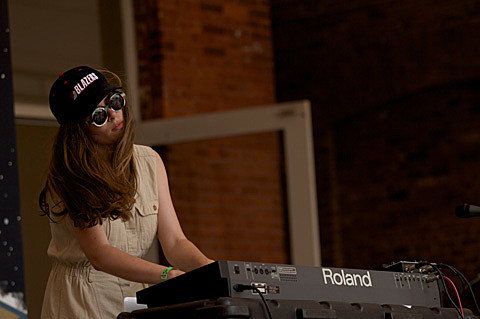 Producer turned art pop wizard Laurel Halo and post-hardcore noisemaker turned producer Ital are teaming up for a tour together later this year. That tour hasn't been announced in full yet but a few dates have been revealed, including a NYC show at 285 Kent on September 21. That show, the DC date, and possibly others are also with M. Geddes Gengras and Magic Touch.

For Laurel Halo, the 285 Kent date is one of many upcoming shows in her hometown of Brooklyn, where she continues to play constantly. Laurel just played a show as part of The Maze last Friday (7/13), and she'll play the previously discussed show at Public Assembly on Saturday (7/21) with Pete Swanson, Noveller and Burning Star Core. Tickets for that show are still available. She's also got upcoming local shows in August, including one at Cameo Gallery on August 2 with Xeno and Oaklander and Telepathe. Tickets for that show are on sale now.

Still more: she'll play the Diamond Terrifier (aka Sam Hillmer of Zs) record release show for Kill the Self That Wants To Kill Yourself (due out 8/14 via Northern Spy and produced by Chris Taylor of Grizzly Bear) at Littlefield on August 8 with Slava (who also plays countless local shows) and Bubbles. Tickets for that show are available. That show happens after Diamond Terrifier wraps up his monthly residency at Zebulon which happens every Tuesday (like tonight [7/17]). Like Laurel did, Diamond Terrifier also plays a Maze show. His is on July 28 with Amen Dunes, Kel Valhaal: Hunter Hunt-Hendrix, Psychic Reality, Dome Theater, and Das Racist DJs.

A list of all dates, a Pitchfork.tv video of Laurel Halo, and an Ital music video are below.

ITAL - ONLY FOR TONIGHT (Dubout/Saviour's Love Megamix) from 100% Silk on Vimeo.