Laurie and her dog Lolabelle 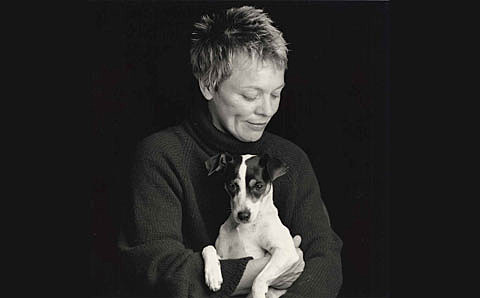 We knew Laurie Anderson's new work, "Habeas Corpus," would be making its U.S. premiere at the Park Avenue Armory from October 2 - 4, and now we have more details. Part of it is a "site-specific environment that uses telepresence to examine memory, monuments, and prohibited space." The installation is open to the public during the day noon - 7 PM, and is $15 general public and free to Armory members. Each night, there will a celebratory performance and dance party with Omar Souleyman, including a new sonic composition created by Merrill Garbus of tUnE-yArDs with Anderson. Tickets are on sale now.

Currently at Park Avenue Armory is Tree of Codes, the ballet created by choreographer Wayne McGregor, visual artist Olafur Eliasson with music by Jamie xx. Tree of Codes runs from September 14-21 and tickets to Thursday (9/17), Friday (9/18) and the Saturday matinee (9/19, 2 PM) are still available.

In other Laurie Anderson news, her new film Heart of the Dog, about her own rat terrier, Lolabelle, will play at NYC's Film Forum from October 21 - November 3. Tickets are on sale and here's the description:

Lolabelle was Laurie Anderson's beloved rat terrier. "Hello, little bonehead. I'll love you forever," is how she greets the puppy in the movie's hilarious first scene in which she gives birth to her dog. Dreams, memories, and stories of childhood trauma and loss form a kind of emotional wallpaper against which Anderson foregrounds her story. The musician/composer/poet/philosopher creates a humorous, deeply moving meditation on the relationship of woman and dog, and in the process comments with wit and prescience on the changes in post-9/11 America. Rat terriers are bred to protect borders, but Lolabelle not only engages in the kind of surveillance the filmmaker notes proliferating everywhere, but also plays experimental piano and paints. "Every love story is a ghost story," Anderson quotes David Foster Wallace, as she illuminates the Buddhist concept of the afterlife (the bardo). HEART OF A DOG employs an original, hypnotic visual language that embraces animation, home movies, and loop-like images, complemented by Anderson's signature music.