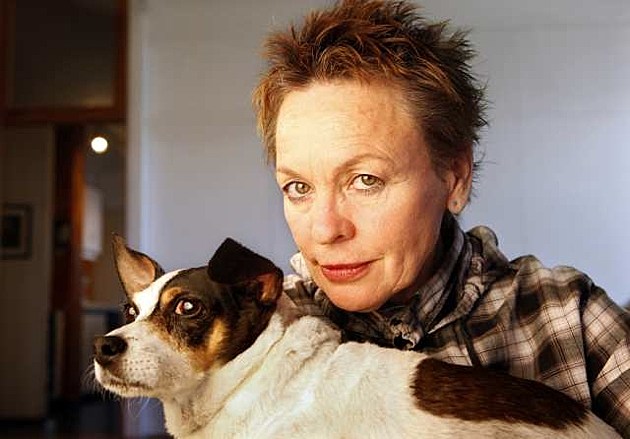 As you may have already seen, a three-minute excerpt of Laurie Anderson's Heart of a Dog film is being shown on Times Square billboards every night in January from 11:57 PM to midnight. It's for this month's installment of Midnight Moment, the same series that projected the Bjork video back in March.

Dogs and their owners are invited to sit on the red steps of Duffy Square while she performs music that, to passers-by in Times Square, may not sound like much because of the low frequency. Humans can tune in with wireless headphones -- there are 350 total -- that will be given out beforehand.

Laurie previously did this outside the Sydney Opera House, and you can watch a video of that below. According to The Times, "At the end, they began to bark -- even the droolers in the front row. 'It was a beautiful sound,' [Laurie] said. 'They barked for five minutes. That was one of the happiest moments of my life.'"

Heart of a Dog, which ended up on a few Best Films of 2015 lists and has been nominated for an Oscar, is coming to HBO soon, and the soundtrack is out now on Nonesuch. Watch the trailer below.