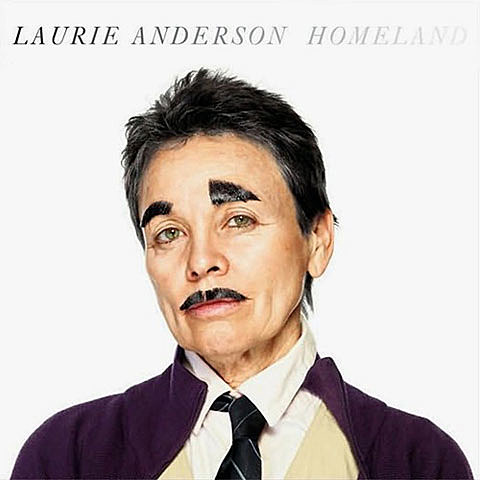 Concerts are for improvisation, jamming and vacations from the real world. Laurie Anderson doesn't do concerts. Her performances are art exhibitions, intricately constructed to intrigue, inspire and, yes, entertain. Over two nights at World Café Live [July 11th and 12th], she and her Homeland Trio presented "Another Day In America," an hour's worth of music from her incredible new album, Homeland. Each night was essentially identical, though it was the precision of the twin performances that added another level of reverence-inducing admiration to the audiences' already overwhelmed sense of awe. With keyboardist Rob Burger (who played on Homeland) and bassist Bill Laswell (who didn't, but has played with just about everyone else), Anderson's two-night residency was a captivating and mesmerizing display.
[Ugly Rumor]

The above-described Philly shows happened right before Laurie's NYC show at Le Poisson Rouge (July 13) which happened one day before her appearance on David Letterman.

Rob Burger and Bill Laswell were also on hand for Laurie's Letterman performance on July 14th. For their live take on "Only An Expert," she also brought along a trio of backup singers and Colin Stetson, who subbed gigantic-sax squeals for the original's Lou Reed guitar shredding. That video is below.

Tonight (7/21) Laurie Anderson has an instore signing and brief performance (as Fenway Bergamot, her male alter-ego, pictued above) at Other Music (15 East 4 St) from 8pm to 9:30pm. It's free (so no chance toask for your money back).

Up next for Laurie is a run of her staged work Delusion at BAM Next Wave Festival, starting in September.

Laurie Anderson - "Only An Expert" 7/14 Letterman