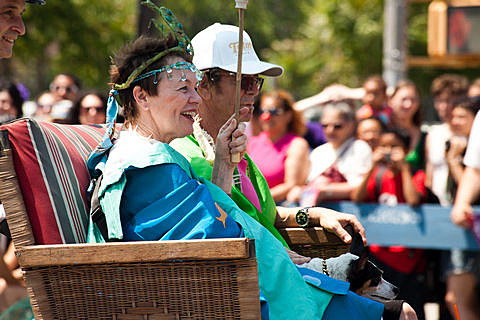 Laurie Anderson and Lou Reed only met in 1992, believe it or not, and didn't actually get married until 2008 but had been a couple since almost the very start. Laurie gave a short eulogy to their local paper, the East Hampton Star, but has now given a longer tribute to her husband, who died on October 27, that will appear in the November 21 issue of Rolling Stone (which has Reed on the cover):

I guess there are lots of ways to get married. Some people marry someone they hardly know - which can work out, too. When you marry your best friend of many years, there should be another name for it. But the thing that surprised me about getting married was the way it altered time. And also the way it added a tenderness that was somehow completely new. To paraphrase the great Willie Nelson: "Ninety percent of the people in the world end up with the wrong person. And that's what makes the jukebox spin." Lou's jukebox spun for love and many other things, too - beauty, pain, history, courage, mystery.

Lou was sick for the last couple of years, first from treatments of interferon, a vile but sometimes effective series of injections that treats hepatitis C and comes with lots of nasty side effects. Then he developed liver cancer, topped off with advancing diabetes. We got good at hospitals. He learned everything about the diseases, and treatments. He kept doing tai chi every day for two hours, plus photography, books, recordings, his radio show with Hal Willner and many other projects. He loved his friends, and called, texted, e-mailed when he couldn't be with them. We tried to understand and apply things our teacher Mingyur Rinpoche said - especially hard ones like, "You need to try to master the ability to feel sad without actually being sad."

You can read Anderson's entire piece at Rolling Stone.