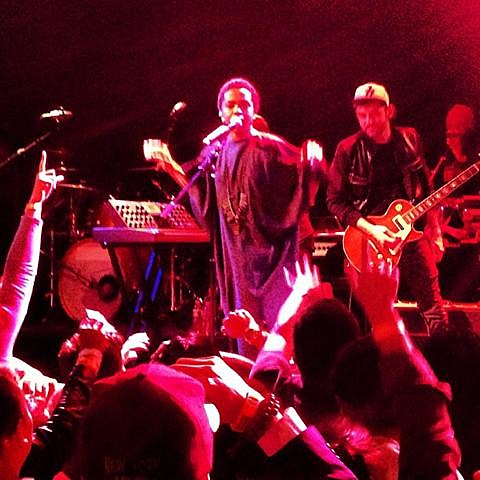 Lauryn Hill is about to do time for tax evasion, and though her high-priced show at Music Hall of Williamsburg last night with guest DJ Q-Tip (May 14) might have smelled like a last ditch effort to wrangle up some cash, she reportedly didn't perform it like that:

Classic tracks such as "Lost Ones" and "How Many Mics" were delivered with such venom and quick-fire vocal prowess that it almost transformed them into entirely new compositions, nearly unrecognizable from the album versions unless you were paying close attention. The latter was especially ferocious, with Hill bringing the song down to near-silence (she would exercise considerable control over her band as the evening went on, shushing and cajoling them in equal measure depending on her mood) and turning things over to her trio of backup singers, before rousing the band and the crowd into a final, multisyllabic climax... She wasn't performing like someone who was about to go to jail. She wasn't performing like someone who just needed the money. Rather, she was performing like someone who cared so much about her craft and presentation that it bled seamlessly out of her, with near-flawless transitions and an intensity that belied her famous reclusive nature. It wasn't Lauryn Hill, neo-soul rapstress. It was Lauryn Hill laying it all on the line regardless of what would, or will, come next. -[Billboard]

Let's hope that hunger grows in her time away. Godspeed Lauryn Hill.

Check a video from last night  where Lauryn Hill invited her children on stage to perform at the end of the evening, below...