Lauryn Hill at Rock The Bells (more by Brook Bobbins) 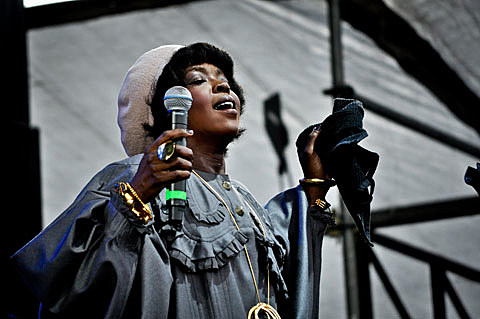 Despite Hill's inactivity, she was recently scheduled to make an appearance in Burlington, Vermont, at the Higher Ground venue. But those plans have already changed twice. The concert was originally set for Dec. 15 but was then rescheduled to Dec. 17. Now it's indefinitely postponed. Higher Ground posted a notice on their website indicating to visitors that an exact date is still being worked out.

Hill has, however, been back on stage this year performing in a few concerts but most recently at a charity event for Parkinson's in New York City, which was hosted by actor Michael J. Fox.

The singer gave an interview with National Public Radio earlier this year sounding motivated and on the verge of making a comeback.

"I'm starting to get excited again," Hill told NPR. "Believe it or not, I think what people are attracted to about me, if anything, is my passion. People got exposed to my passion through music and song first." -[Yahoo]

The reclusive Lauryn Hill last logged dates as part of Rock The Bells (pics here, here, and here), and now the former Fugee will again come out of hiding to (hopefully) play a few shows including Music Hall of Williamsburg on Dec 28th and Bowery Ballroom on January 1st. Tickets for both shows (MHOW, Bowery) go on sale at noon on Friday (12/10).

Let's hope Lauryn doesn't decide to get her nails done on either of those days. (side note: we have no idea why Roots shows, including the 12/29 one at Starland Ballroom, show up on Ticketmaster when you search for Lauryn). Full tour dates, which do not include a new Vermont date yet, and some videos below...