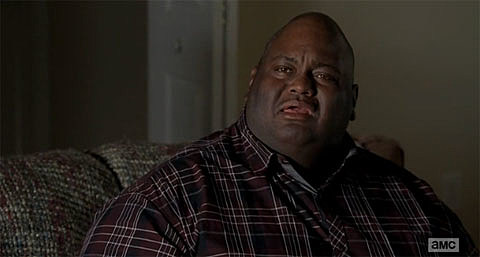 You might know him best as everyone's favorite Breaking Bad character Huell, but Lavell Crawford is also a stand up comedian. This year he has live dates coming up in Knoxville, Washington DC, Denver, Fort Lauderdale, Dallas, NYC and NJ. The SIX NYC shows are this October at comedy club Caroline's on Broadway (tickets). The NJ show was just announced at Wellmont Theater in Montclair on December 5. Tickets for the NJ show are available now for $30 VIA GROUPON. Friday they go up to at least $50 when they go on sale via Live Nation.

Breaking Bad just took home a whole bunch of Emmys for its final season which seems like it happened so long ago...

As "True Detective's" cosmically attuned sleuth Rust Cohle put it: "Someone once told me time is a flat circle. Everything we've ever done or will do, we're gonna do over and over and over again."
[Washington Post]

Breaking Bad spinoff, Better Call Saul, which is based on Bob Odenkirk's Saul Goodman character (Huell's boss), will premiere on AMC in February 2015. Meanwhile they've released a few very short teasers which you can watch below...