the calm before the storm @ Williamsburg Waterfront (photo by Schoetz) 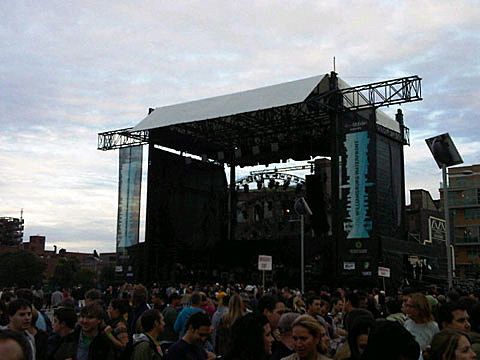 As you may have heard/noticed (if you weren't at the Hold Steady at Beekman Beer Garden that night), jam banders (who weren't at the rescheduled Dave Matthews Band Caravan on Randall's Island) invaded Williamsburg Saturday night because Widespread Panic headlined the Williamsburg Waterfront.

Not surprisingly, some residents weren't too happy with the scene and widespread panic ensued. Gothamist points out that some people still aren't over it and the following open letter to OSA, aka the Open Space Alliance, was drafted:

On Saturday night, September 17, 2011 between approximately 9:40 PM and 10:20 PM the following events took place on North 7th Street off the corner of Kent Avenue in Williamsburg, Brooklyn.

A lawless drug nightmare erupted on my street after Saturday night's OSA concert featuring the band called Widespread Panic.
At about 9:40 PM the noise from the concert in the East River State Park had finally ended. So I was about to try to get some video editing work done on my computer when my attention was drawn to loud popping sounds, sounds of gas rushing and the roar of large crowd outside on the street. When I looked out my front window I was horrified to see a huge mob collecting. A group of nitrous oxide balloon sellers had assembled next to a dumpster across the street. Hundreds of people, if not more, were gathering up and down the block buying balloons filled with the gas and inhaling them. Concert-goers already drunk from the East River State Park were becoming even more highly intoxicated from the nitrous oxide. They were wandering around like zombies holding fists full of balloons.

There was not ONE SINGLE COP to be seen anywhere. I called 911 and explained what was taking place. The 911 operator was having difficulty understand the situation so I gave him the location and pleaded, 'Just send the police now. We need help here!', and hung up. Afraid for my safety while filming on my stoop, I used my heel to keep the door open behind me just in case I had to escape. In one of the last clips you can see a couple of men coming toward me in a menacing way.

Nitrous zombies are going to eat your brains! (thus making it impossible to edit videos).

Anyway, I'm really sorry to anyone that appears in these videos, but there are videos which were posted to the StopOSAConcerts Youtube account (the quote at the top of this post comes from one of the video descriptions), and so, well, you can watch them below....