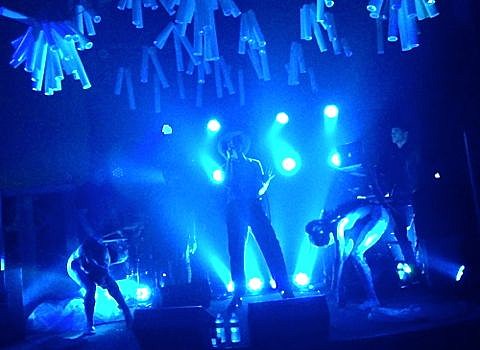 Lawrence Rothman seemingly dropped out of nowhere about three weeks ago with "Montauk Fling" a gothy, R&B-tinged track that featured the singer's melodramatic baritone. The accompanying video was made by big name director Floria Sigismondi, and owed more than a little to Cindy Sherman's still photography. That track was officially released as a single this week on Sigismondi's new MAMAROMA label. Last night (8/7) there was a release party for the single at Glasslands. I will fully admit to being more than a little skeptical walking over to the venue, but I have to say I was impressed with Rothman's short set.

Mind you it was hard not to be a little impressed by the spectacle on stage, that I'm told was designed by Sigismondi (who was in attendance last night). Two dancers (from Justin Timberlake's "Mirrors" video, directed by guess who) flanked Rothman, who was in silhouette most of the time from the flood of lighting behind him. Pretentious? A little, but I thought it worked, and the dude's got charisma (and a set of powerful pipes) to match the visuals. He only played maybe six or seven songs, all of which I thought were good or at least interesting, and finished with his new single's slinky, pitched-down b-side, "#1 All-Time Low." At the end of that number he set down his mic and jumped in the sparse crowd. I thought he was going to sing acapella, but he just walked through the crowd and out Glasslands' front door, and didn't come back. That's an exit.

Tonight (8/8), Rothman opens for UK singer (and Disclosure collaborator) Sam Smith at Mercury Lounge, and I'm told he'll be doing a similar stage show. So if you're going tonight (it's sold out), his 7 PM set is worth hustling over for. If not, word is he'll be back in NYC in October for CMJ. Meanwhile, check out video of his Glasslands performance of "#1 All-Time Low" as well as the music video for his new single, below.