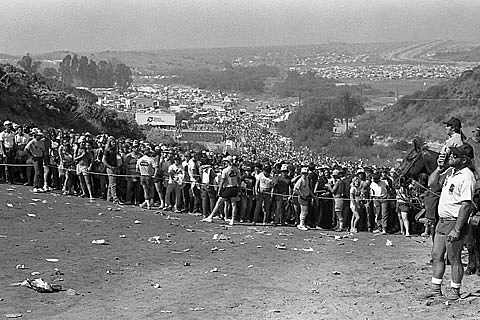 As previously mentioned, tickets to the four LCD Soundsystem shows at Terminal 5 go on sale Tuesday, but now we also know the exact time, price, openers, and a lot of special rules. LCD says:

-there is a two ticket per person limit.

-(as an attempt to avoid the "secondary market") there will be no hard tickets. the only way to get in to terminal 5 on the nights of the shows will be to show i.d. at will call and then immediately enter the venue.

-we're told that ticketmaster will also sweep the online purchases daily and delete any duplications from potential scalper bots. (please come to the venue early on show nights - the line for entry may be long). if the tickets for the shows don't sell out very quickly, we'll stop the duplicate ticket thing and allow people to buy tickets for multiple nights. (just want to make sure all who want to go get a ticket before "multiples", if that makes any sense).

-oh... and we can't do a walk-up ticket buy at the mercury lounge box office this time (w/o ticketmaster fees) because those are only the hard tickets, which can be sold afterwards. (yes, i asked about putting names on the hard tickets.)

-more important: we're as bored of this ticket stuff as you are, so let's just have fun a few last times, and then get some food! 2 more liquid liquid shows! the new york debut of mr. shit robot live, maybe featuring some guests! loudness and lights! fancy stuff!

It's awesome the band is going out of its way to stop scalpers, though unfortunately this is a key statement: "please come to the venue early on show nights - the line for entry may be long.", There's also no mention of a way to give your tickets to someone else if you can't make it that night, and I'm not sure how someone without a credit card in their name can get tickets. Also, as they point out - there's no way to get tickets without fees now. That all said, this is not a new debate, but which way would you prefer?