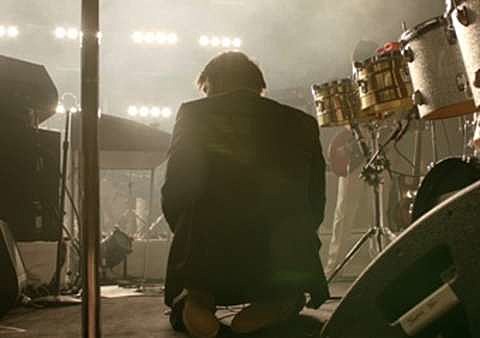 If you missed the many "one night only" screenings of the LCD Soundsystem concert doc Shut Up and Play the Hits last night (7/18, did you go?), those in NYC still have a few more chances to see it. The Landmark Sunshine has 7PM and 10PM screenings on both July 25 and 26, unfortunately they're all sold out. However, Brooklyn Bowl will hold a screening on Friday, July 27 with the added bonus of LCD drummer Pat Mahoney DJing as well.

Doors are at 11:30PM with the screening starting at midnight boasting "full concert sound" which probably mean "really really loud" which is probably the optimal viewing experience. Tickets are on sale now. If you're wondering if this film is any good, here's what The AV Club had to say:

James Murphy didn't direct Shut Up And Play The Hits, the documentary about the last concert performed by his band, LCD Soundsystem, at Madison Square Garden in 2011. But the film is a product of his magpie record-collector's aesthetic. The idea to throw a big farewell bash with friends (including Arcade Fire and comedian-musician Reggie Watts) is cribbed from The Last Waltz. The film's elegiac, end-of-an-era tone comes from Woodstock. The framing device for Shut Up And Play The Hits--the ecstatic performance footage is cut with morning-after scenes of a pensive, bored-looking Murphy struggling to come to terms with what he's just done--is reminiscent of Gimme Shelter. The obvious difference is that there's a lot less at stake in Shut Up And Play The Hits: Nobody died at LCD Soundsystem's final show, apart from the group identity Murphy created a decade earlier.

Meanwhile, The Creators Project has put together four little documentaries featuring Aziz Ansari, Reggie Watts, bandmembers and others sharing memories of the LCD salad days, which you can check out below.