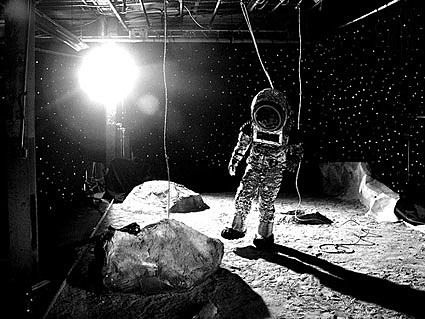 (I've been listening to a lot of of) LCD Soundsystem's new album "Sound of Silver" (which) is (officially) out on DFA/Capitol Records on March 20th.

...the follow-up to the massively acclaimed and eponymous 2005 debut, was recorded over the summer of 2006 in a farm in upstate New York by Murphy and visitors from the big city including live band members Nancy Whang, Pat Mahoney and Tyler Pope. There, between silver foil-covered walls, nine tracks were crafted...

A Spring tour announcement is on the way, but in the meantime we know that tickets (thx Bill) go on sale Friday at noon for a March 30th LCD show at Bowery Ballroom in NYC.

It's also rumored that LCD are playing a Brooklyn show some time around then too, and speaking of a Brooklyn show - Night Time presents Carl Craig and DFA DJ Tim Sweeney at Studio B Friday night. And then of course there's DFA DJ Juan Maclean with Professor Murder at Hiro Ballroom TONIGHT.

All known tour dates below...