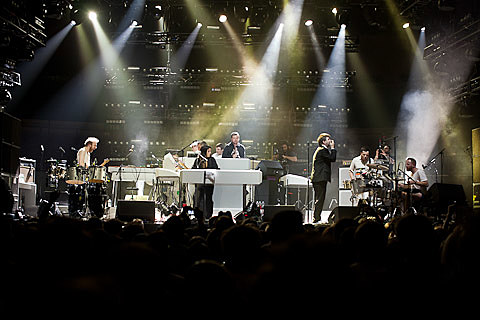 LCD Soundsystem played their final show at Madison Square Garden on April 2, 2011 after a four night run at Terminal 5. BV photographer Dominick Mastrangelo, who was at the show, wrote:

From where I was in the middle of the front GA section nobody stopped dancing, or singing along or smiling the entire night. (Save for, like at all four Terminal 5 shows, the couple of awkward, yet brief and deserved intermissions.) Every turn to scan the Garden saw people full-on, in the groove dancing; not just some barely-registered shuffling back and forth. Honestly, everyone who was there should take a bow because they were fantastic.

And no, there was no Daft Punk, but there was Arcade Fire singing joyously along on "North American Scum" (the third set's highlight) and an appearance by Reggie Watts who also played with the band at three of the four Terminal 5 shows. The boys choir featuring members of Mr. Dream was there, as were the two female backup singers, and the horn section that included Kelly Pratt and Colin Stetson. Original LCD guitarist Phil Mossman was back and featured a few times in addition to LCD band members
Nancy Whang, Tyler Pope, Pat Mahoney, Matt Thornley, Gavin Russom, and David Scott Stone.

A documentary of the show, titled Shut Up and Play the Hits, was made and will debut at the Sundance Film Festival this month. It was directed by Dylan Southern and Will Lovelace. Watch the trailer, with more info about the movie too, below...

SHUT UP AND PLAY THE HITS is both a narrative film documenting this once in a lifetime performance and an intimate portrait of James Murphy as he navigates the lead-up to the show, the day after, and the personal and professional ramifications of his decision.

SHUT UP AND PLAY THE HITS was directed by Dylan Southern and Will Lovelace and produced by Lucas Ochoa and Thomas Benski of Pulse Films (the same team that directed and produced the Grammy-nominated Blur documentary, NO DISTANCE LEFT TO RUN) and James Murphy. The film's executive producer is Christine Vachon (I'M NOT THERE, FAR FROM HEAVEN, BOYS DON'T CRY, ONE HOUR PHOTO, HEDWIG AND THE ANGRY INCH, etc.), with former LCD manager Keith Wood and The Creators Project.