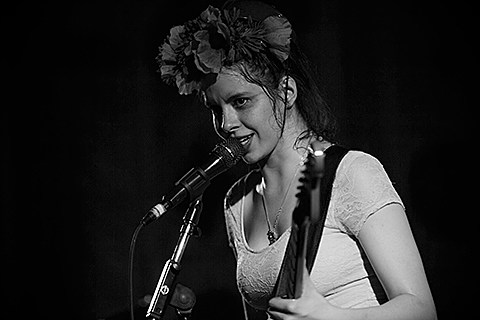 Mexican garage rockers Le Butcherettes spent the past year touring with Antemasque, Melvins, and Faith No More, and also released their newest album A Raw Youth on FNM frontman Mike Patton's Ipecac Recordings. Now they're set to go on a headlining tour around SXSW in 2016.

The tour hits NYC on March 7 at The Studio at Webster Hall and March 9 at Rough Trade. Tickets for those shows go on sale Friday (1/15) at 10 AM and noon, respectively, with an AmEx presale for Rough Trade starting Wednesday (1/13) at noon. All dates are listed below.

Le Butcherettes are also one of the artists taking part in the very cool Joyful Noise 2016 Flexi-Disc Series. It's the label's fifth and final year doing the series, and it has each artist putting out never-before-heard material on a 7" flexi-disc (limited to 1000 copies) that you can get by subscribing. Other artists include Don Caballero, Thurston Moore, Swirilies, Julianna Barwick, Lil Bub ft. Aesop Rock & Kimya Dawson, Ought, Sondre Lerche, Prince Rama, Chris Cohen, Ava Luna and Briana Marela.

Stream A Raw Youth with Le Butcherettes' list of tour dates below...