Sia just peed all over our van. We are on herbal x. And we bought a whistle -jd samson 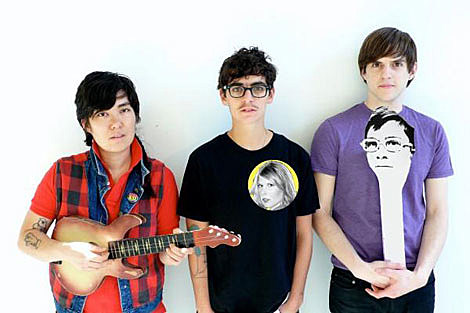 I just saw the Marie Claire with CHRISTINA AGUILERA on the cover and I realized we are waaaay overdue for an update. Yes, the rumors are true...Le Tigre wrote and produced a couple of songs with Christina! Not wanting to break the spell of this magic opportunity as we wait in suspense to hear if our tracks make it on the album, we've been quiet on the topic. But now that the buzz is getting crazy I just can't contain myself. Needless to say, for a feminist band obsessed with pop music, it was pretty much a dream come true.[Johanna Fateman of Le Tigre]

This is the second "working with Christina Aguilera" news we've posted this week. The first was Sia, who also happens to be JD Samson of Le Tigre's girlfriend.

"Le Tigre" might be actively working with Christina Aguilera, but they still don't have any shows coming up. MEN, a project headed by Le Tigre's JD Samson, does. That group, which used to pair JD and Joanna, now has a "core group" of "Hirsute members Michael O'Neill (Princess, Ladybug Transistor) and Ginger Brooks Takahashi (LTTR, The Ballet) with Johanna and artist Emily Roysdon contributing as writers, consultants, and producers."

All dates and the full post about their work with Christina Aguilera are below...

Around this time last year we got word that Deceptacon was Christina's jam and that she wanted to work with Le Tigre on some new songs. At first we were tormented by the goal of writing "another Deceptacon" for her, wondering how to crack the code to its energy and production style ("shit, do we have to find an HR16-B on eBay and synch-up a fast beat with a warped guitar sample on an antique Mirage?!") plus we wanted to write melodies that would showcase Christina's incredible voice. The pressure was on! But we quickly realized that we just had to be ourselves and put our hearts into pulling together our best demos to play for her.

So... we prepared for our trip to LA to work with her in a typically crazy Le Tigre way due to our individually hectic schedules. Kathleen and I were in NYC meeting up periodically, handing off beats on mini-drives, and downloading JD's arpeggiator loops and basslines sent from hotels rooms and backstage wi-fi all across the country (she was on tour with MEN). And, oh yeah, did I mention I had just given birth?! In June I flew to LA with my 11 week old baby Goldie and met up with JD at the airport shuttle to the car rental place. Kathleen stayed in NYC and we did lyric brainstorming via text messages, and JD and I sent her running to FedEx with her secret signature vocal FX box so Christina could try it out.

Meeting Christina and working with her at her home studio was simultaneously super comfortable and normal-seeming while also kind of a mind-blowing window into another world. If you've read the Marie Claire article you know about the crucifix doorknobs and plush couches, red and black decor, dish of ricolas and awesome speakers. But what made me feel at home as an artistic collaborator was that the space she had to be creative in was also filled with cool art and beautiful books and tons of notepads and a million great pens. Curling up in sweatpants, puzzling over lyrics and checking her blackberry while the beat loops forever. . . Hey Christina is just like us after all! She is totally cool and hilarious and down-to-earth.

But when it came time to lay down vocals we were in awe. She is a technical virtuoso behind the mic, layering take after take of flawless vocals and coming up with variations, ad-libs, and harmonies on the fly. And while her voice is like a force of nature, she is completely disciplined in her approach to recording and realizing her vision for each track. At the end of each night she would have a CD burned for her and come back with detailed comments about things she wanted to perfect the next day.

It was definitely intimidating, when we stopped and thought about it, to work with such a huge star (I mean, she has her own perfume line), so we tried not to think about it too much. Obviously Christina has a massive audience and a mainstream presence, and so the question a lot people ask about the experience is how did this change or influence our approach to the content of the songs. Together we tailored themes and specific references to her personality and image but found a ton of common ground in our aim to make upbeat danceable tracks celebrating female friendship, strength, and of course, PARTYING. And while the giant sound of her stacked vocals and the pop sheen she lends to the tracks might seem at odds with Le Tigre's aesthetic roots, it really works. The songs have a lot of elements we're known for, like a garage guitar sound, schoolyard chants, new wave-y synths, electro beats, and somehow it all sounds crazily right with Christina's unbelievable voice. We hope you get to hear the songs sometime soon!

In other news, we've been busy shooting interviews and gearing up to promote our forthcoming DVD of live performances, backstage antics and touring adventures. More on that later. . .