LE1F at Santos in September (more by Julie Schabel) 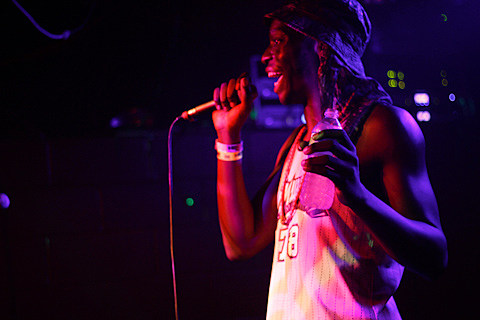 LE1F is currently on the road with Das Racist, SAFE, and Lakutis for a tour which culminates in NYC on October 15 at Irving Plaza (rescheduled from 9/27). Tickets for that show are still available.

You'll have way more chances to catch LE1F in NYC this month though because he's got a number of CMJ shows lined up. He'll play the Terrible Records party at Glasslands on October 16 with True, Kirin J Callinan, Regal Degal, and more (free with RSVP); the FADER showcase at Rubbertracks on October 17; the MTV Hive showcase at The Studio at Webster Hall on October 18; the Ad Hoc party at 285 Kent on October 19; the PItchfork showcase at new Brooklyn venue Villain on October 19 (which Death Grips also plays); the Cantora afterparty at Westway on October 19 (75 Clarkson St); the Impose Mag showcase at Deliquency on October 20; and Cameo Gallery on October 20 with Labyrinth Ear, High Highs, and American Royality (tickets). Lineups for most of those shows TBA. All LE1F dates are listed below.

In related news, LE1F's tourmates SAFE and Lakutis recently recorded a song together with production from Brooklyn's Steel Tipped Dove that will appear on an upcoming Greedhead compilation, which LE1f, Heems, and others will also be featured on. You can download that song, titled "Neotropical Vacation," above or stream it below (via FADER).

That song stream and a list of all LE1F dates below.