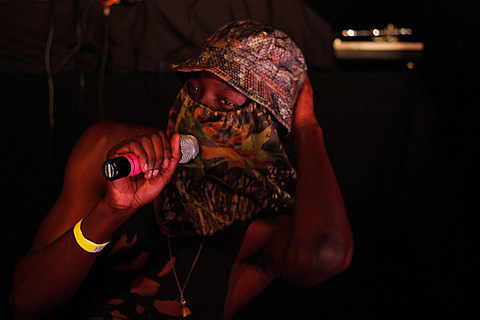 It's been a little while since we've gotten a show from NYC rapper Le1f, who plays locally a lot, but that will change this Friday (2/8) at Santos Party House, where Le1f will play Frankie Sharp's Friday with DJ Carlos Jadraque, DJ Nita, DICAP, and Joeseph Trotto Junior. It's a late show (11 PM doors) and admission is $10 at the door.

Le1f recently released a new mixtape, Fly Zone, the followup to 2012's tape, Dark York, and like its predecessor, Fly Zone it's got murky beats and Le1f's impressive space age flow. The mixtape's got guest spots from Spank Rock, Haleek Maul, SAFE, Don Jones, Rahel and Kitty (who dropped the "Pryde" from her name, and who plays 285 Kent tonight [2/7]). You can download Fly Zone for free HERE and stream it in full below.

Le1f also appears as a guest on the new Sasha Go Hard mixtape, Round3: The Knockout, on the song "To The Girls." The mixtape also features production from Diplo on a track, and a verse from Kreayshawn on another one. Though Sasha and Le1f work well together, Le1f prefers the futurism of cloud rap, while Sasha's razor sharp flow is rooted in the gangsta rap of yesteryear. You can download that mixtape for free HERE and stream it in full below.

Sasha Go Hard - Round3: The Knockout