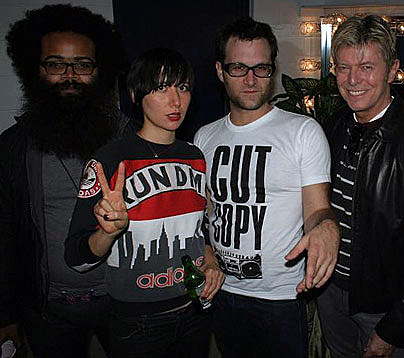 Updates to a sucky situation....

Good grief, can't say I don't feel a little grossed out by someone taking a liberty with music that was mine and Dave's. Shit happens nonetheless. All I can do at this point is offer up a recommendation... if you happen to get your mits on one of those old demos floating around MY personal favorites and the ONLY ONES I would have released for anyone to enjoy is "Pumpkin" and "Snakes and Worms". The rest I probably would have pitched or buried for while longer. No use bitching about something that's out of my control.

Dave Sitek of TV on the Radio writes...

I APOLOGIZE FOR THE TONE OF THE LETTER I WROTE A FEW HOURS AGO . I HAD THIRTY PEOPLE CALL ME WITHIN AN HOUR ASKING ME ABOUT THIS POST. MY FRIEND PETE THREW AWAY SOME SUITCASES OF MINE. SOMEONE WHO KNEW THEY WERE MINE, WENT THOUGH THEM , FOUND THE DISC, POSTED IT ONLINE... I FREAKED OUT (not thinking it was my suitcases discarded by a friend , which I DO KNOW is ultimately my own fault, but rather ASSUMED (wrongfully) it was from one of many boxes discarded by the firemarshall after a housefire) AND WROTE THIS POST. Since then , the story was told to me, by the person i was NOT VERY ARTICULATELY appealing to ... his name is mike. he apologized... He didnt see what that would trigger in me... what affects it would have on me , my friends , and my ever dwindling sanity. i re-read the post , felt like i wrote it out of anger and confusion. i apologized to mike for my tone .... then read about how awful i am on a few websites by people like doing that sort of thing. by flipping out i connected with something i had lost... i am not taking down the post because i want to be reminded how much of an ass i can be, and if i forget , i am comforted by the fact that the blogs... the web... will always be there to remind me. i really do need to get "offline". in a real way. goodbye online. goodbye blog. thanks mike.

DAVE & KAREN ON STAGE TOGETHER IN BOSTON (CRED) 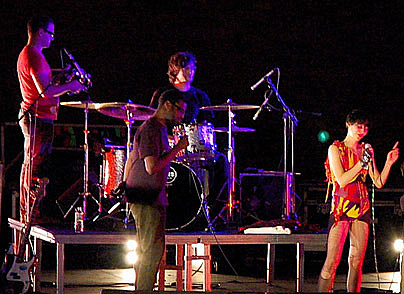