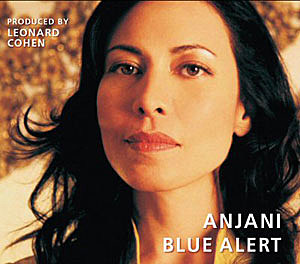 To "commemorate the 40th anniversary of Leonard Cohen’s debut album, and for the first time in the digital era, expanded editions of Songs Of Leonard Cohen, Songs From A Room, and Songs Of Love And Hate will arrive in stores April 24th. Each will contain previously unreleased bonus material."

"In conjunction with these, Anjani’s Blue Alert will be issued in a special two-disc digipak.....The album’s ten songs were written by Cohen and Anjani, she arranged the music and accompanied herself on piano, and the album was produced by Cohen." Listen to four songs at MySpace.

To promote the release, Anjani is going on a small tour in April. She's playing NYC three times. The first one is at Joe's Pub on the release date - April 24th @ 9:30 - Leonard Cohen WILL BE THERE, nobody knows if he'll perform - there are still tickets. She also just added a 2nd show at Joe's Pub that same night @ 11:30 (no tickets yet). Leanord Cohen may or may not stick around for that one. And the third NYC show is April 29th @ Joe's Pub - no Leonard at that one for sure. All dates below....