Leatherface at Chaos in Tejas 2008 (juarezma) 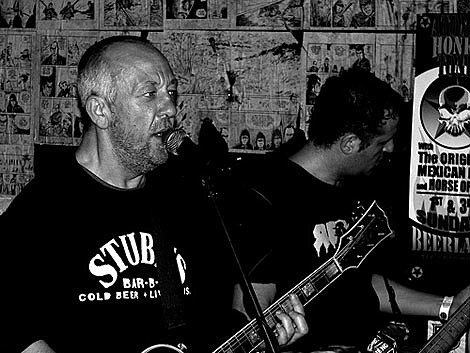 Leatherface is a British punk rock band from Sunderland fronted by Frankie Stubbs. The band is known for an eclectic style spanning American folk music, hardcore punk and post-hardcore. Formed in August 1988, ...Leatherface's music has been described as a cross between Hüsker Dü and Motörhead, a notable element being Stubbs' rasping, "gravelly" vocals.
Though never attaining much more than a cult following outside their native country, the band has been cited as an influence by higher-profile punk acts such as Hot Water Music and Dillinger Four. [Some have] ...listed Leatherface's 1991 release Mush as one of the fifty greatest punk albums of all time. -[Wiki]

Leatherface is working on their new LP for Big Ugly Fish Recordings, a twelve track effort due in Feb 2010. Stefan Mush, Graeme Philliskirk, Dickie Hammond and Frankie Stubbs will hit the road in the tail end of that month for a East Coast tour starting in Canada, hitting Knitting Factory in Brooklyn on 3/5 (tickets) and concluding in Florida ten days later. Support will come from Yesterday's Ring on all dates, with Sinkin Ships, Bridge & Tunnel (that's who NYC gets), and Riot Before rotating in throughout the trek. Just two months later, the band will ship down to Austin to play Chaos in Tejas again alongside Rorschach, Bastard Noise, Jeff The Brotherhood, The Marked Men, and many others.

Full Leatherface dates and a few videos are below.

Leatherface "You Are My Sunshine" at Out of Spite Festival in Leeds, August 2007.

Leatherface - Do The Right Thing (promo)