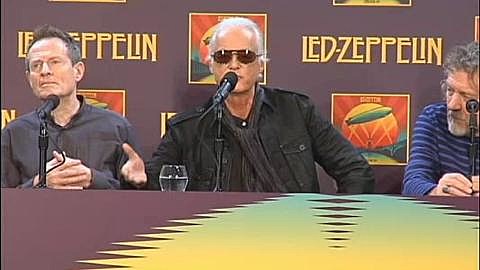 Speaking of Led Zeppelin, they (Robert Plant, Jimmy Page, John Paul Jones, and the late John Bonham's son, Jason) were also in NYC yesterday (10/9) for a press conference at MoMA, hours before their new film, Celebration Day, made its world premiere in Manhattan's Ziegfeld Theater. Rolling Stone was at the press conference and noted that Robert Plant seemed pretty uncomfortable for much of it (most likely due to dreaded questions of another reunion):

Minutes later, a radio host praised the film but added, "I don't know if it's going to quench the thirst of those who wished to see you in the flesh." Again, the band was silent until Plant said simply: "Sorry!"

Later, Plant clarified himself. "We were so happy we were getting it right and taking it beyond what we thought we were about that night," he said of the O2 gig. "There were moments where we took off ... But the responsibility of doing that four nights a week for the rest of time is a different thing. We're pretty good at what we do but the tail should never wag the dog, really. If we're capable of doing something, in our own time, that will be what will happen. So any inane questions from people who are from syndicated outlets, you should just really think about what it takes to answer a question like that in one second. We know what we've got, you know."

Page explained he felt the band still had unfinished business after previous reunions at Live Aid and Atlantic Records' 40th Anniversary concert. "I think if we had the opportunity to get back together again, which is what we had there to do the O2, things had left us a little uncomfortable like Live Aid and the Atlantic 40th, etc. We just really wanted to get it right and go out and play to people who maybe never heard us, who had heard about this reputation and what we were about, and basically stand up and be counted for what we were. That's my feeling, anyway."

Regarding his interest in modern bands, Plant also added, "I love Mumford & Sons."

After the premiere last night, the members of the band made their way over to Monkey Bar for an afterparty. Other guests at the party included Joan Jett, her producer Kenny Laguna, Metallica's Kirk Hammett, rock photographer Ross Halfin, Patty Griffin, and others. Meanwhile, the actual film screening was attended by Kiss's Paul Stanley and RHCP's Chad Smith.

Jason Bonham's Led Zeppelin Experience is taking their tour to the NYC area for two shows in November.

A video from the Led Zeppelin press conference is below.