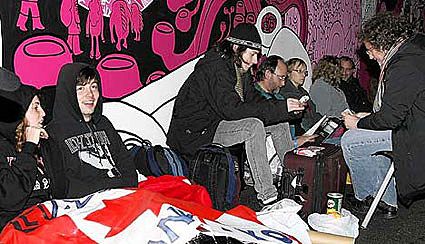 More than one million people applied in a lottery for one of the 20,000 seats. Tickets have been snapped up for over £1,000 on sites such as eBay - but buyers are warned they could be turned away.

All registered ticket holders have to pick up their tickets in person with photo ID and they are then given a sealed wristband that cannot be taken off until after the concert.

Although rumours are abuzz that Led Zeppelin may embark on a full reunion tour, the band have officially declared tonight is a one-off concert and have promised to sing their best known songs including "Stairway To Heaven" and "Whole Lotta Love".