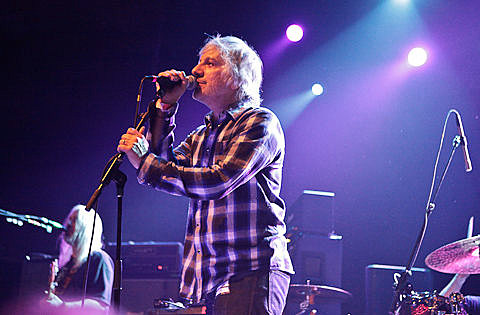 The Lee Ranaldo Band, which features Lee along with his Sonic Youth bandmate Steve Shelley, Alan Licht, and Tim Luntzel, are about to head to Spain and Portgual for a short tour this month, and upon returning to NYC they'll play a hometown show at Union Pool on April 28. Admission for that show is $12 at the door and openers TBA. They've got some other dates coming up this year too, all of which are listed below.

Meanwhile, Lee and Steve's past Sonic Youth cohort Thurston Moore is on tour with his band, Chelsea Light Moving, and that tour hits NYC TONIGHT (4/5) at Bowery Ballroom with Prana-Bindu and Marco Fusinato. Tickets for tonight's show are still available.

Thurston also contributed to Joyful Noise's new "Cause & Effect" series, which pairs an influential solo musician with an artist they've influenced on a split 7" single. Thurston's 7" has a track by Talk Normal on the b-side. The series also includes Dinosaur Jr/Sebadoh's Lou Barlow paired with Dumb Numbers and The Jesus Lizard's David Yow paired with Child Bite. You can stream the Thurston Moore/Talk Normal 7" at Pitchfork and listen to the other two below.

Meanwhile, you can catch Kim Gordon in NYC at the recently expanded "Night of Improvised Round Robin Duets," which takes place during the Red Bull Music Academy NYC residency at Brooklyn Masonic Temple on May 1. Kim will be joined by Andrew Bird, Robert Glasper, Questlove, Andrew WK, James Chance, Julia Holter, Thundercat, and many more. Tickets for that show are still available.

All Lee Ranaldo dates are listed, along with the Joyful Noise 7" streams, below...

(via Consequence of Sound)