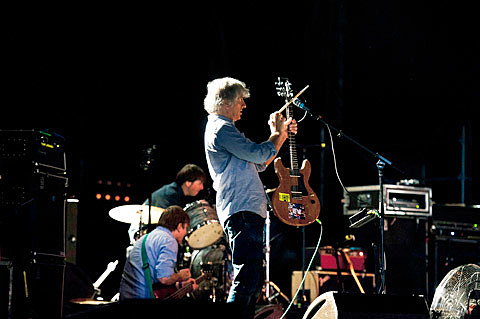 Sonic Youth's Lee Ranaldo, whose solo work had previously been highly experimental and noise-driven, is currently working on his first rock-oriented solo album, with material more similar to his Sonic Youth contributions. Lee and his new band, which includes Alan Licht, Irwin Menken and Sonic Youth bandmate Steve Shelley, played their first show opening for Wild Flag at The Bell House in October. They opened their set with the song, "Angles," which Lee introduced as "kind of a love song that goes out to a couple dear friends of mine who are going through some shit right now." Maybe he was talking about these friends? Videos of Lee and band playing that song and another called "Xtina" is below.

Lee and his band will play their next NYC show performing songs from the upcoming album on December 16 at Glasslands. Tickets for the show are on sale now.

Lee is also performing as part of NY Guitar Fest at Merkin Hall with Kaki King on January 12. Tickets for that performance are still available.

Lee, a photographer on the side, has also been posting pictures from Occupy Wall Street to his page on SonicYouth.com.

In related news, Thurston Moore is one of the artists scheduled for Lincoln Center's American Songbook 2012 Season and will play an acoustic set on February 2. Tickets are available as a presale, though they require a password.