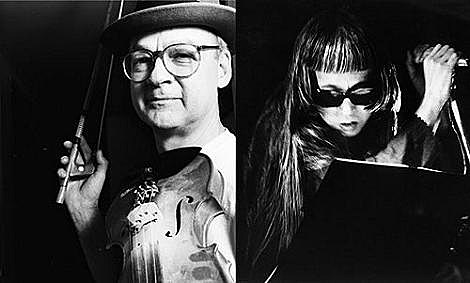 Experimentalists collide when Keiji Haino and Tony Conrad team up for a show at The Studio At Webster Hall on April 25th (tonight), one of only three US shows for the duo. Tickets for the NYC show are still available. Full tour dates are below.

Although the duo has not recorded anything, Keiji Haino recently dropped a new record under the moniker The Haino/Masataka Fujikake Duo, on the Japanese label Full Design Records on February 11. A collection of live material from a batch of 2005 shows in Yokohama, the record is currently available to us yankees here.

Opening The Studio show will be another violinist of the avant-garde persuasion, C Spencer Yeh, who recently dropped two collaborative LPs: Cincinatti with noise technician John Wiese (available on CSY's label, DroneDisco) and New York Nuts and Boston Beans with Paul Flaherty and Greg Kelley (available here). April 25th will be the only solo show for CSY over the next few weeks, but he does have dates as part of a duo (with Michael Johnsen) and a trio (with Rafael Toral & Trevor Tremaine). One of those trio dates will take place in NYC in the next few weeks, as part of the No Fun Fest featuring headliner Sonic Youth.

Hopefully SY's Lee Ranaldo gets his long lost Fender Mustang back by then. 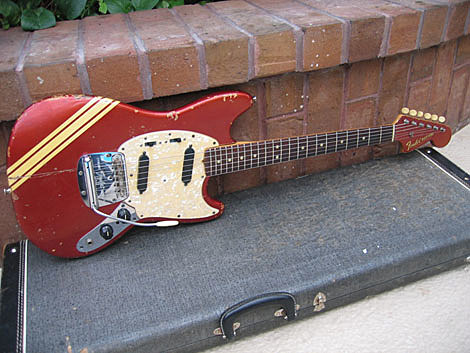 The guitar (pictured above) was stolen from Lee in July 1999. Then, last week, someone unknowingly bought it on eBay, and before even receiving it (he still hasn't received it as of this post), the buyer coincidentally was "just looking at Sonic Youth´s guitars", and recognized the guitar that he had just bought as Lee's stolen guitar.

He posted his story in a thread (that is currently 35 pages long) on Offsetguitars.com. Lee was then contacted, offered the guitar back (at the eBay auction cost) and accepted. In another coincidence, the buyer lives in the Netherlands and Sonic Youth is in Europe this week. Unfortunately the guitar didn't arrive from seller to buyer in time for the buyer to hand it to Lee in person, but...

"So my brother, a friend and me went to Dusseldorf yesterday to see Sonic Youth. We spent the whole afternoon in museums to see the Sonic Youth exhibition, which was really great. I can recommend it to anyone with the possibility of going there. It made me want to start reading William Burroughs and Allen Ginsberg immediately.

The concert was supposed to start at 20:30 and we arrived at that time, we figured it probably wouldn´t start until 22:00 or so as that´s what we´re used to. Surprisingly, they started exactly on time so I missed a chance to get onto the balcony for special guests. So we watched the gig among the ´common´ people , which wasn't so bad, though it´s sometimes hard to stand the smell of those puny creatures. Tongue The concert was amazing, as usual with these guys, they played a normal set but when it was over it felt like they had only played for 15 minutes. The highlight for me was Kim´s singing, her voice sounds better than ever. The new songs (I think they played 4) sounded good too, but I can´t comment on the specific songs as I don´t know the titles.

After the gig was over I pushed my way up to the front row and called the guitar tech, Eric Baecht, he came up to us, gave me a mastery bridge (from one of Lee´s guitars, he even included the allen wrench keys!) on which Lee had written a thank you note, along with a couple of picks with Sonic Youth prints on them. Can´t wait to try it on my Jazzmaster! Eric then told me to wait for him to finish clearing the stage and took us to the backstage where I met Lee. We had a little chat about the guitar, Mark Ibold also showed up briefly. I met Eric again who told us we can get on the guest list for any SY gig in the future (!!!). I also spotted Thurston but he left quite early , Kim was there the whole time, didn´t see Steve.

So my friends and me hung out at the bar for a while feeling quite awkward and trying to think of something to talk to Lee about without sounding cliché but it seemed impossible so we left soon after. It was a bit of shame because they´re really kind and approachable people, but I just didn´t know what to talk about.

After all we had a great day and I´m looking forward to going to their gigs in the future. For free! HA! Plus I won´t have to worry about the show being sold out or anything." [Sauerkraut the guitar finder]

Speaking of Sonic Youth, Thurston Moore will perform as part of a trio with saxophonist Daniel Carter and Ryan Sawyer (Tall Firs, Stars Like Fleas) at Union Pool on May 2nd, with Trevor Dunn's Madlove, and Pink Noise. Madlove recently announced the release of their new album, White With Foam on Ipecac Records.

Trevor Dunn will play bass with the Melvins when they play all of Houdini at Webster Hall.

Tour dates, and some videos from Sonic Youth's exhibition in Germany, below...