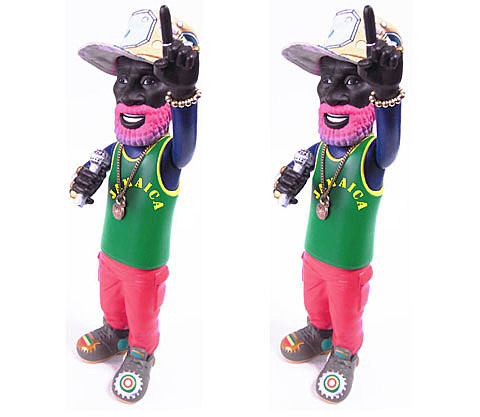 Dub pioneer, living legend and genuine eccentric, Lee "Scratch" Perry is currently on a US tour that will stop at NYC's Gramercy Theater on Thursday (5/17) with openers Subatomic Sound System. Tickets for that show are still available. All Lee Perry dates are listed below.

If you're unfamiliar with his extensive canon of work, you might want to check out Perry documentary, The Upsetter, which was released on DVD earlier this year. Perry's seminal album Blackboard Jungle Dub just came out as a cool 10" box, one of the hottest Record Store Day releases this year. And for the real fan, you can now get the Lee "Scratch" Perry vinyl figure which is pictured above.

Perry makes a short but memorable appearance in the recently-released documentary Marley which is still in theaters (like NYC's Sunshine Cinema). Marley is also streaming now via various sources and comes to DVD August 9.

In other reggae news, August marks the 50th anniversary of Jamaica's independence from British colonial rule and there will be a celebration at Summerstage in Central Park on August 19 with a free show featuring Inner Circle, Israel Vibration, The Mighty Diamonds and DJ Carter Van Pelt.

In other news from the island, we were sad to read that Skatalites bassist and founding member Lloyd Brevett died last week at age 80. RIP Lloyd.

You can watch videos of the Skatallites and Lee "Scratch" Perry in action, plus the trailer for The Upsetter and a list of all Perry tour dates below...