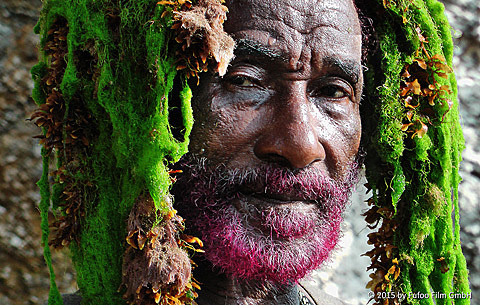 Dub reggae icon Lee "Scratch" Perry is a one-of-a-kind dude whose influence cannot be overstated -- and where a term like "eccentric" is probably an understatement. A new documentary, Lee Scratch Perry's Vision of Paradise, aims to show at least a little of the method to his madness:

For the past 15 years Volker has followed Perry on a spiritual and geographical journey taking in Jamacia, Ethopia, Germany, Switzerland and London. Over this period Volker has earned Perry's trust, resulting in a never-before-granted level of access and insight into Perrys' fantastical, spiritual world. This classic-in-the-making tells a story of epic, magical propotions that's not a biography, more fairytale documentary, which is in turns funny, poetic and frequently mind blowing.

The film made its world premiere on July 4 at London's East End Film Festival. No word on North American screenings, but you can watch the trailer and watch a BBC news segment about it, below.

Lee Scratch Perry will be doing a little touring this fall, including a NYC date at Brooklyn Bowl on October 1 with Subatomic Sound System. Tickets for that show are on sale. He's also playing Bumbershoot in Seattle and Riot Fest Chicago. Tour dates are listed below.