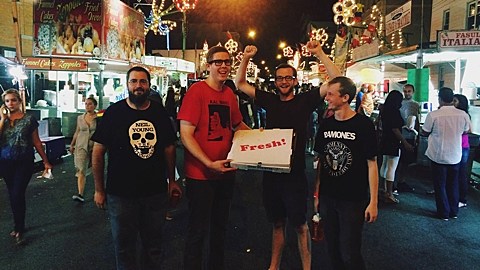 The way they tell it, Philly's Left & Right are just "four regular ass dudes trying to live their fucking lives man." They also happen to make pretty good poppy punk, as you can hear on new single "Age of Independence" off their upcoming album, Five Year Plan, which comes out on September 9 on Infinity Cat's Cassette Series. (The label is owned by JEFF the Brotherhood, the cassette series is curated by Diarrhea Planet's Casey Weissbuch.) The record was produced by Justin Pizzoferrato, whose work with Dinosaur Jr, Sonic Youth, Speedy Ortiz and more has made him a pretty trustworthy guy for this kinda stuff. The new song premieres in this post and can be streamed below.

Left & Right were in NYC earlier this month for a show with Sleepies and Kal Marks at Death by Audio (anyone catch that?), and they'll be heading back out on the road tonight (8/28). The tour begins in Montclair, NJ and it hits NYC for a previously-mentioned show on Friday (8/29) at Grand Victory with Such Hounds, Brooklyn indie rockers Dead Stars and Long Island alt-country punks Crow Bait. Tickets for Friday's show are still available.

All tour dates are listed, with the new song stream, below...