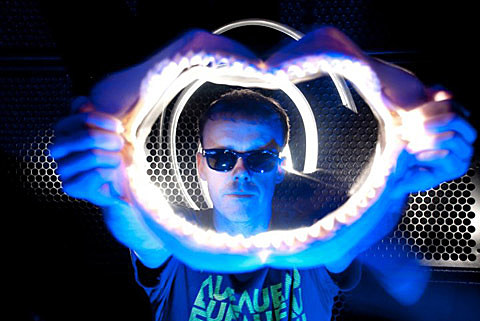 The production team which brought house music back from the brink of commercial mediocrity, Leftfield made it safe for artistic producers to begin working in a new vein termed progressive house. Paul Daley (a former member of A Man Called Adam and the Brand New Heavies) and programmer Neil Barnes combined the classic soul of early Chicago and New York house with the growing Artificial Intelligence school of album-oriented techno to create classic, intelligent dance music. [After a series of well-recieved singles, Leftfield released] their debut LP, Leftism... in 1995; the long-awaited Rhythm and Stealth followed four years later. With only two albums under their belt, Leftfield decided to split in early 2002 to focus on solo projects. -[Allmusic]

Neil Barnes resurrected Leftfield last year, and though founding member Paul Daley is not on board, he has been replaced by original vocalists Djum Djum, Earl 16 and Cheshire Cat plus Adam Wren (keyboards), Kwes Sey (keyboards and computers) Jess Mills (vocals) and Sebastian Beresford on drums. The electronic [now] crew is scheduled to play a few shows in Australia in March and, at the moment, two US dates in April. One is at the sold-out Coachella and the other is right afterwards on April 19th at Webster Hall in NYC. Tickets for that show go on AMEX presale Wednesday, 2/7, at noon, and then general sale starts Friday.

All tour dates (more to be announced?) and some videos below.