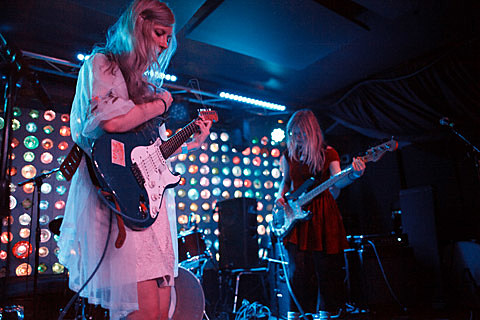 Ohio's been a pretty good breeding ground for catchy lo-fi punk lately, thanks to All Dogs, Tweens, Vacation, Boys, Sports, and probably way more. Yet another one is Cincinnati trio Leggy, who, like Sports, played Indie Pop Prom in Brooklyn last month and won us over at that show.

Leggy recently put out a new EP, Nice Try, which was recorded by Jerri Queen of two of those above-mentioned Ohio bands (Vacation and Tweens), along with John Hoffman. It feels rooted in swaggering garage rock, but doesn't just go for overly-aped '50s rock n' roll. Songs like "A Reverie" and "July" have a certain darkness to them, and singer Véronique Allaer has a few vocal tricks up her sleeve that are a little atypical of the genre too. Listen for yourself below.

The band also have tour dates, including SXSW, but nothing else scheduled for NYC at the moment. Those are listed below too.