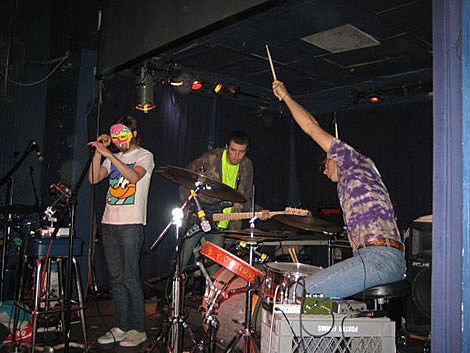 "Lemonade marries big beats with heavy psychedelic noises, while touching on elements of North African rai, dub, breakbeat, and samba and much more in their self-titled debut. The SF based trio (soon to be NYC trio) is comprised of childhood friends Callan Clendenin (vocals), Alex Pasternak (percussion) and Ben Steidel (bass)-did not have grand expectations for the project outside of exploring their shared vision of a place that they have never been: a fantasy landscape that is at once gritty and pristine, tropical and foreboding. Their trippy, pulsing self-titled debut is out now, Oct 21st, on True Panther records and its already received favorable mentions from RCRD LBL, Pitchfork Media, XLR8R, SF Weekly, Uncut, among many others. Hot on the heels of this much anticipated release, Lemonade is announcing the REMIXTAPE album this November as companion to their debut. The REMIXTAPE features contributions from Delorean, Lazer Sword, Ghosts On Tape, C.L.A.W.S, among others." [PR]

Lemonade are playing the BrooklynVegan party at Knitting Factory on Saturday October 25th, 2008. They go on at 8pm in the Tap Bar. All Ages. FREE.

There will also be bands playing in the Old Office (Knitting Factory's 3rd stage from noon-9pm as well). PLUS, it's not our party, but there is also a free day show in the tap bar that runs at the same time too (and anyone can also go to).

Lemonade are also playing Zebulon on Friday, Pianos later on Saturday (the True Panther CMJ showcase), AND going on tour with El Guincho in November and December. Assuming EG doesn't cancel, that means they Lemonade play (le) poisson rouge in NYC on December 2nd. All dates below....