this picture is not from the Beacon show, but it looks similar 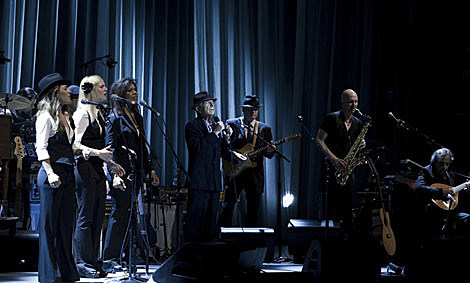 February 19, 2009 - New York, NY - As Leonard Cohen took to the historic Beacon Theatre stage Thursday in New York for his first stateside performance in fifteen years, AEG Live announced a run of North American engagements including nights in New York, Boston, Chicago and Los Angeles and a sunset performance at the Coachella Valley Music and Arts Festival in Indio, California. Tickets for some dates go on sale to the public beginning Friday, February 27th, 2009 with additional on sale dates following on March 2nd and March 9th, 2009...

"We are delighted to finally bring this phenomenal tour to the USA. Having spent the last 12 months touring the World, from Romania to Australia from London to Rome, America will now get the opportunity to see the show that has enthralled over 750,000 concert goers across the World to date. Not one to miss lightly," commented Rob Hallett, President of International Touring / AEG Live.

There is nothing negative to say about Leonard Cohen's legendary 3+ hour performance at the restored Beacon Theatre last night. The man has stamina. You would never know he is 74 years old. His band (listed above) were all amazing, and Leonard is such a gentleman - especially when it came to introducing each and every person that made the show possible, including all those on stage with him. I don't think I ever experienced so many standing ovations during the course of one show.

Famous Blue Raincoat
If It Be Your Will
Democracy

I Tried To Leave You